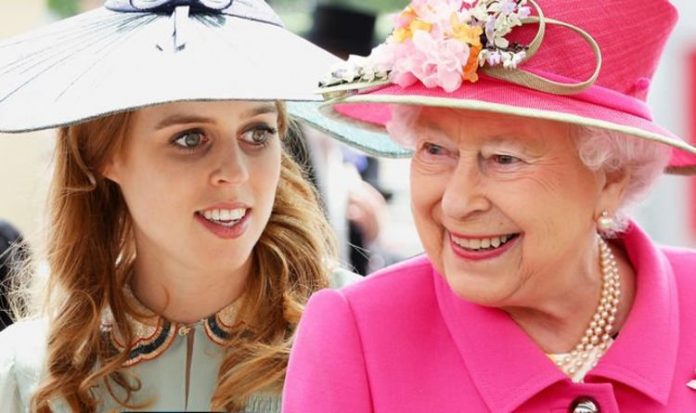 The Duke and Duchess of York’s daughter surprised the world after announcing she had wed fiance Edoardo Mapelli Mozzi in secret during lockdown, with the Queen described as being her granddaughter’s “guest of honour”. As a result of coronavirus restrictions, the wedding itself only saw a handful of Royal Family members attend, with pictures of the special day released shortly after. The Queen’s adoration of Beatrice was there for all to see, as the Princess wore a hand-me-down dress that was crafted by Her Majesty’s own wedding-gown designer Norman Hartnell.

But in an unearthed video with Andrew Marr, Princess Beatrice showed off another special childhood memory that both she and the Queen enjoyed while growing up.

Beatrice showed off the Queen’s old Wendy house with Mr Marr, after she helped complete renovation work on the enchanting building.

Speaking in the video, Beatrice told Mr Marr: “Granny and her sister played here growing up and now we’ve been lucky enough to play here, and cousins and second cousins – it’s a big family treat.

“It’s the most glamorous Wendy house ever – it’s really beautiful and what you’re seeing with your eyes now is after about a year of renovations.

“It’s been completely redone with new curtains and new wiring – it got a bit of a spruce up really because it was such a wonderful little space.”

The pair then went inside the small house, bending down to make their way in to see an array of beautiful dolls, plates, cutlery and other essential items that children need to throw a tea party.

She continued in 2012: “As you can see it’s got all the little China and glass and everything was created for its good, especially the house.

The wedding was originally scheduled for May 29, but due to COVID-19 restrictions it was pushed back again, allowing the Queen and husband Prince Philip to attend.

The friend concluded in a report by PEOPLE: “It was all about the Queen’s schedule.

“The Queen was the guest of honour, and it was very important that she was there.”