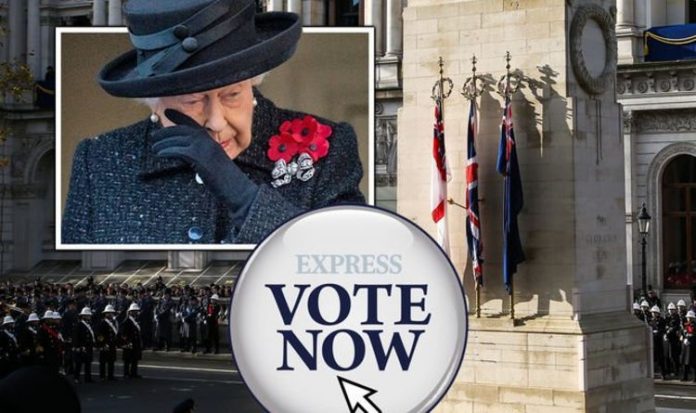 For the first time in history the service held at the Cenotaph memorial in White Hall will be closed to the public. Members of the Royal Family, led by the Queen, along with politicians including the Prime Minister and leading figures in the Armed Forces, take part in the major ceremony each year to honour the country’s war dead.

In recent years the monarch has opted to watch from a balcony as Prince Charles lays a wreath at the foot of the memorial on her behalf.

Earlier this month, Culture Secretary Oliver Dowden asked members of the public not to turn up to the event scheduled for Remembrance Sunday on November 8, citing coronavirus restrictions.

He said those wishing to pay their respects should do so from the comfort of their home while watching the service on TV.

The open-air ceremony usually draws around 10,000 members of the public who join the royals and MPs in observing two minutes’ silence at 11am.

The Government’s ban on public attendance sparked some calls for ex-servicemen to defy the orders and turn up at the Cenotaph.

One defiant activist said: “To all veterans. Still fall in at the Cenotaph.”

Another tweeted: “Remembrance Sunday at the Cenotaph will be closed over coronavirus.

They said social distancing should be observed and the number of attendees should be scaled back compared to events in previous years.

Local authorities have been asked to prioritise those wishing to lay a wreath at memorials.

People wishing to gather with loved ones in groups of more than six will not be permitted to do so unless it is at an event organised by a charity or business.

This year’s Remembrance Day is due to come around during the height of the UK’s second wave of coronavirus.

Millions of Britons remain under some form of local lockdown as the daily number of cases and deaths continue to rise.

Greater Manchester’s 2.8 million residents are among those facing Remembrance Sunday under Tier 3 restrictions.

After the “very high” level of alert was ushered in on October 23, Mancunians continue to face severe restrictions on public gatherings.

It is not known when the strict measures will be lifted.

People living in Nottingham, Rushcliffe, Gedling and Broxtowe are among the latest to brace for Tier 3 rules.

The measures will come into force at one minute past midnight on Thursday and will expire after 28 days, meaning they will be in place for Remembrance Day.