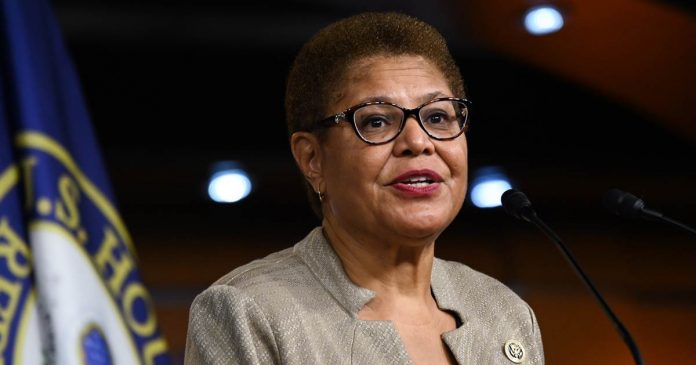 WASHINGTON — Rep. Karen Bass, D-Calif., who is among the leading contenders to become Joe Biden’s running mate, responded Saturday to a resurfaced video from 2010 showing her praising the Church of Scientology.

Bass, who was serving in the California General Assembly at the time, said at a ribbon-cutting ceremony for one of the organization’s churches in Los Angeles that Scientology has “made a difference” with a creed that “speaks to all people.”

A video of the event is posted on the Scientology.org website and was first reported by The Daily Caller, a conservative news outlet.

“As a public servant, I try to do everything in my power to give a voice to the voiceless, and to guarantee that no one goes unheard,” Bass said at the ceremony. “The Church of Scientology I know has made a difference, because your Creed is a universal creed and one that speaks to all people everywhere. That is why the words are exciting of your Founder L. Ron Hubbard, in the creed of the Church of Scientology: That all people of whatever race, color or creed are created with equal rights.”

Bass on Saturday defended her past comments on Twitter, writing that since that time the church has been exposed and people are now more aware of the allegations of abuse.

“Just so you all know, I proudly worship at First New Christian Fellowship Baptist Church in South LA,” Bass wrote.

“Ten years ago, I attended a new building opening in my district and spoke to what I think all of us believe in — respect for one another’s views, to treat all people with respect, and to fight against oppression wherever we find it,” she continued.

“Since then, published first-hand accounts in books, interviews and documentaries have exposed this group,” she said, adding that on the topics respect for different views and fighting oppression, “my views have not changed.”

Bass, who has served as chair of the Congressional Black Caucus since 2018, was first elected to the Congress in 2011 and represents part of Los Angeles County. She previously spent six years in the California State Assembly, and in 2008 became the first Black woman in U.S. history to serve as speaker of a state legislative body.

READ  Change of Her Majesty’s Ambassador to the Republic of Albania: Alastair King-Smith

Bass is among several contenders to be the running mate for Biden, the presumptive Democratic presidential nominee, who has said he will announce his choice the first week of August.

Lauren Egan is a reporter for NBC News based in Washington.