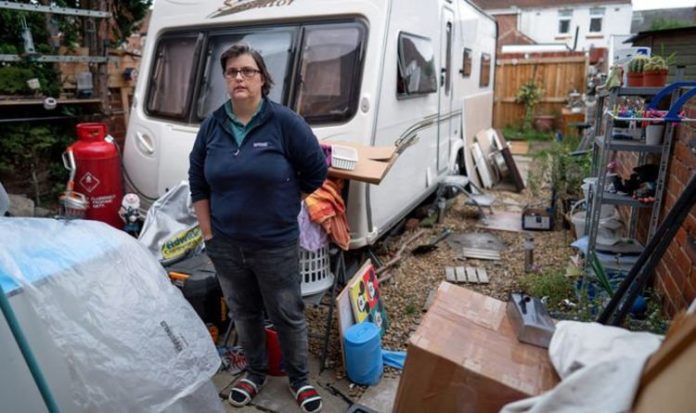 One householder says the stress of legal wrangles pushed her to attempt suicide after they were offered just £7,000 to cover £40,000 repairs.

In the Doncaster village of Fishlake, John Duckitt’s bungalow was the first to be flooded when the floodbanks on the River Don behind his house burst on November 8, 2019.

Widower John was forced to flee the house he shares with his daughter Emma, her boyfriend Thomas and their three children.

He said: “It was like a river running in my drive. The flood banks at the back of me overran and it came down my drive. Within 20 minutes, it was up to your knees in the house.”

The family fled to safety and have been living in two static caravans on John’s drive ever since.

His insurance company finally paid out for his repair works three weeks ago and he is now considering what to do with the family home that he raised his two children in.

The retired peat worker added: “I don’t want to rush the house. I’ve essentially got two options – I can get it repaired and raised about a metre or I can demolish it and start again.”

Lorna Ulyett, 40, says things got too much for her partner Claire, 41, amid the turmoil of coping with the ­lockdown that she attempted to take her own life last month.

The couple were forced out of their house in Bentley, Doncaster, on November 7 last year and were told they would be able to return within six months and moved into a caravan.

But when Lorna needed to shield ­during the pandemic due to respiratory problems it forced Claire to move into the upstairs of their water-ravaged home with their daughter.

Lorna said: “It has absolutely destroyed the family life that we had.

“Our 19-year-old daughter has gone to live with a friend because she couldn’t face coming home from work to the house.”

And Claire said: “I tried to take my life. The stress has been awful. I can’t wait for it all to be over.”

Lorna, who says their repair work has now finally been authorised, added: “We’re not living, we’re just existing. The only time I go into the house is for a bath.

“I can’t stay in the house because the damp is bad for my lungs.

“But the caravan is just a metal box, so it is freezing in the winter and too hot in the summer. I have to sleep in a bobble hat and gloves as it’s so cold.”