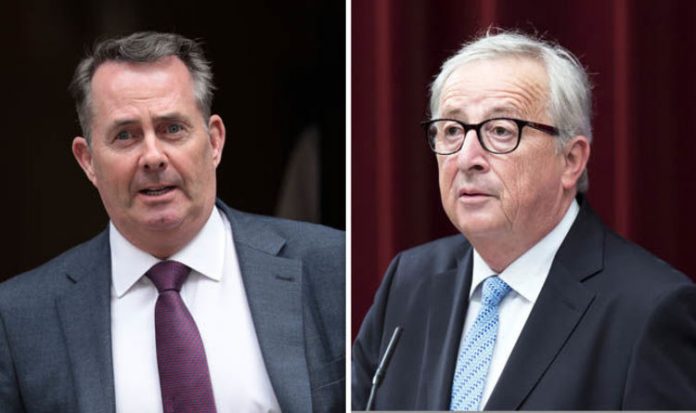 Remainer civil servants, backed by Brussels, tried to argue that the International Trade Secretary should not talk trade with US officials at the same time as the European Commission president was in Washington because he is there representing the 28 member states, including Britain.

But Dr Fox dismissed the concerns, raised by the Cabinet Office and sources close to Mr Juncker, and will fly out as planned tomorrow.

A source said: “The Brussels bureaucrats didn’t seem to want Liam in Washington at the same time as Juncker even though he booked his trip first.

“It just goes to show how desperate they are for us not to strike a trade deal with the US before the EU.

“The Cabinet Office was also stressing out about it, concerned it might upset the EU. Liam put his foot down. He said we have got to get on with it.”

Dr Fox is due to meet US trade representatives Robert Lighthizer and Commerce Secretary Wilbur Ross on Tuesday in a bid to persuade them that a free trade deal with Britain is still possible following the publication of the Government’s controversial Brexit White Paper.

President Trump initially said the White Paper, which calls for the UK to abide by EU laws and regulations on goods and agrifoods once we leave, would “kill” any trade deal with the US. But he backtracked during a press conference at Chequers with Theresa May.