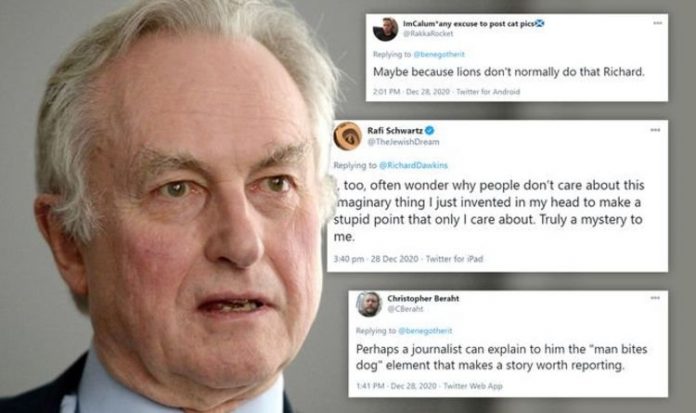 In an odd tweet, the biologist and writer posed a question as to why we place so much importance on certain aspects of nature as opposed to others. He said: “If lions were discovered weaving antelope-catching nets ten lion-lengths wide, it would be headline news. “Yet spiders weave intricate insect-catching nets hugely bigger than themselves, and we treat it as commonplace.

“But is web-weaving really any more remarkable than the unseen weaving of cells in embryology?

Such was the strangeness of the tweet, he soon caused a frenzy over its purpose.

One commented: “If spiders started roaring and devouring gazelles it would be headline news.

“Yet lions do this every day and receive no press coverage.”

A second said: “Perhaps a journalist can explain to him the “man bites dog” element that makes a story worth reporting.”

Earlier this year, Richard Dawkins hit out at David Cameron’s decision to hold a Brexit vote.

He labelled the former Prime Minister as “irresponsible” for calling the referendum in 2016.

Mr Dawkins said: “What I think about Brexit is that it was wrong to determine the future of our country and of Europe for the long term, for decades, maybe even for longer, on the basis of one vote, on one day, in June 2016.

“When people change their minds, if you look at the opinion polls they fluctuate all the time.

“If you take a vote one day, that’s all very well we do that in general elections but we know that at the most, five years, we can have another go, we can change our minds again.

“This was an incredibly irresponsible decision by David Cameron.

“I’m not talking about whether Brexit itself is right or wrong, but the decision to allow a referendum on such a momentous thing, a long-term thing, on one day, to be decided by the entire electorate rather than in a representative democracy by Parliament was an irresponsible decision he took because he thought he’d win.

“He thought Remain would win, he was confident it would win.

“He was simply trying to see off the Ukip wing of his own party.

“It was a very very irresponsible thing for Cameron to do and we’re going to live with the consequences for decades.”