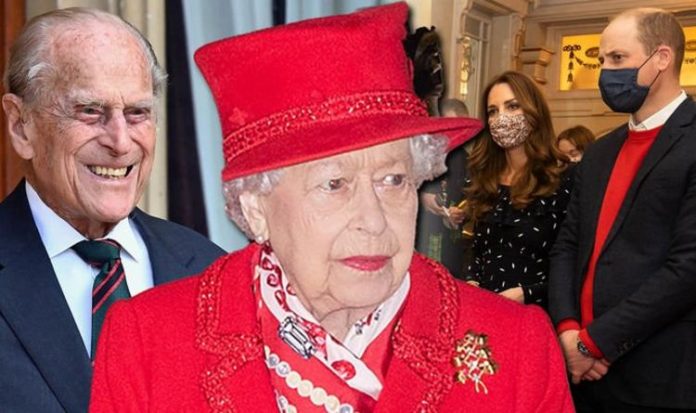 The Royal Family said farewell to Prince Harry and Meghan, the Duchess of Sussex, this year as they left their senior roles to embark on new ventures outside royal life. Despite this loss, the Royal Family has persevered throughout 2020 and luckily they appear to have a lot more to celebrate in 2021. Express.co.uk has compiled a guide to show all the happy events the royals will celebrate next year.

The Royal Family as an institution and a family has been affected by the coronavirus crisis.

They have struggled amid the pandemic, like others around the globe, but luckily the year is almost at an end and the Royal Family has plenty to look forward to in the upcoming year.

One large reason to celebrate is that the Queen will welcome two new great-grandchildren in 2021.

Two of the granddaughters of the Queen and Prince Philip are pregnant and due to give birth next year.

Princess Eugenie and her husband of two years Jack Brooksbank announced they were expecting their first child earlier this year.

The couple were married in October 2018 and have not confirmed a due date, except for early 2021.

The Queen’s eldest granddaughter and Princess Anne’s only daughter Zara Tindall is also expecting a child.

Zara and Mike Tindall have two children together, Mia and Lena, born in 2014 and 2018 respectively.

The couple is now expecting their third child together.

The Royal Family is also expected to celebrate its eldest member next year.

Prince Philip has been at the side of the Queen for 72 years since their marriage in 1947.

The Duke of Edinburgh retired in 2017 after decades of working as a full-time royal, but it is expected Britain will honour his big birthday.

Celebrations have yet to be confirmed by the Royal Family, but one politician has already earmarked the date for a very special event.

Last year, the Conservative Party MP for Southend West, Sir David Amess, announced a competition to name a new city within the UK was being looked at as a means to mark the Duke of Edinburgh’s birthday.

He told the Commons: ”How does a place acquire city status?

“Well, there needs to be a contest, it usually takes place around a royal event.

He added: ”I am working on other royal events to see how we can fine-tune the timing.

“It would be great if it could happen next year because it will be the centenary of the mayoralty of Southend”.