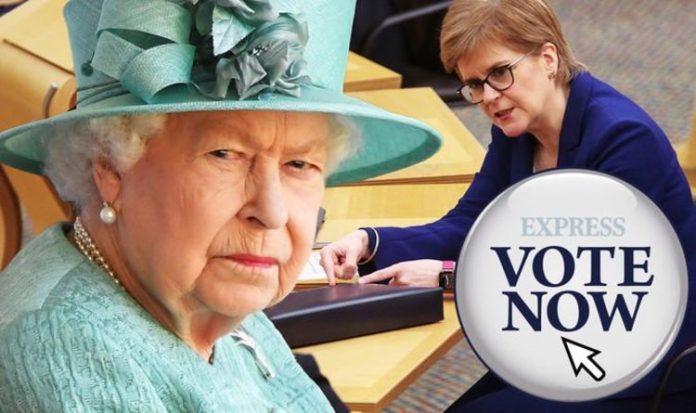 The Queen’s love for Scotland is very well known even to non-royal fans. The monarch spends weeks during the summer at her castle in Balmoral, where she receives friends and family members. Even in 2020, despite the ongoing pandemic and the cancellation of the events they take part in over the summer, the Queen and Prince Philip travelled north to spend a few weeks in Scotland.

The emotional attachment to Scotland and political role the Queen has make it highly unlikely for the monarch to be in favour of the SNP’s bid for independence, one expert has noted.

“She’s all for unity. I think for Scotland to be independent is not something she would want at all.”

She continued: “Balmoral is the place [the Royal Family] all love most.

Royal Family news: Should The Queen speak out against Scottish independence to save union? (Image: GETTY)

Royal Family news: Nicola Sturgeon and the Queen ahead of a private audience in 2018 (Image: GETTY)

“They really, really love Scotland. That’s where they want to be.”

While the Queen may not be in favour of a second referendum on Scotland’s independence, she is barred from expressing her political views.

The Royal Family’s website explains the Queen’s role within the country saying: “As Head of State The Queen has to remain strictly neutral with respect to political matters.

“By convention, The Queen does not vote or stand for election, however Her Majesty does have important ceremonial and formal roles in relation to the government of the UK.”

Royal Family news: The Queen in Scotland in 1967 (Image: GETTY)

Yet, former Prime Minister David Cameron admitted he wanted the Queen to give the country a sign in favour of the union after he saw a YouGov poll placing the Yes faction ahead.

The Queen indeed made a comment on the independence referendum, albeit striving not to side with either the Yes or No factions.

Outside Crathie Kirk near Balmoral, the monarch was asked about the referendum by a royal watcher waiting for her.

She said: “Well, I hope people will think very carefully about the future.”

This remark was interpreted by the No faction as the Queen’s support for the union.

Royal Family news: The line of succession to the throne (Image: EXPRESS)

He said: “All she said, perfectly innocuously, was you’ve got to be very careful how you’re voting.”

Pete Wishart, the SNP MP for Perth and North Perthshire, said there were no doubt the Queen’s brief comment had an impact on Scottish voters.

Royal Family news: Princess Eugenie said the Queen is the ‘most happy’ when in Balmoral (Image: GETTY)

He said: “We knew Cameron was up to something at the time and for him to explicitly chronicle how he approached it, almost strategically, is almost beyond belief”.

Fears of a new independence referendum on Scotland’s future have been growing after all three polls conducted on the issue since June have seen the pro-independence side ahead.

Over the weekend, First Minister Nicola Sturgeon said she wants to seek a “legal referendum” to be held if there is a pro-independence majority following May’s Scottish parliamentary elections.