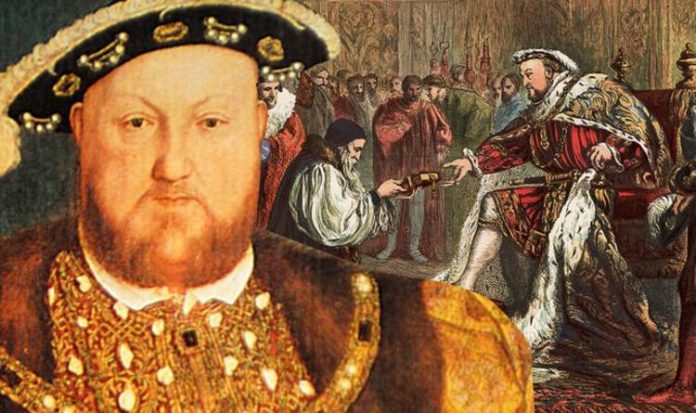 Henry VIII is one of the nation’s most iconic figures, known as much for his foul temper – which saw more than 72,000 people executed during his reign – as well as his large waistline. He is seen as an enduring figure, and was central to England’s rule and presence throughout the world more than 400 years ago. New information and insight is constantly being found regarding the monarch, famous for marrying six wives during his life, including recently when the exact location of his final jousting match was discovered.

However, questions surrounding exactly what the then-55-year-old King said as his body shut down after years of severe health issues, often remain.

In the months before he eventually perished, Henry VIII’s health had deteriorated rapidly, with his 5,000-calorie-a-day eating and drinking habit finally taking its toll on his dying body.

But with many of his courtiers fearing the worst, Henry VIII “was overcome with weakness from which he’d never recover”.

Panic overcame his assistants, who “buzzed around him, applying various potions and poultices”, while “tapestries were drawn across windows” and a fire burned around him to keep “evil vapours at bay”.

YouTube channel Grunge added: “Eventually, Henry began to drift off for the last time. At least one scholar attributes Henry’s one-way ticket to the afterlife to renal and liver failure.

“It was a slow slide, brought on by his unhealthy lifestyle, and not a pretty one. His last words were to summon Archbishop Thomas Cranmer to his bedside, but Henry was unconscious by the time the churchman arrived.

“Cranmer asked the King for a sign that he still believed Christ would save him, and Henry is said to have squeezed the Archbishop’s hand in response.”

But in another reflection before his death, Grunge explained earlier this year that Henry VIII turned to God, by asking for mercy.

The video concluded: “It was clear the King was nearing death, and so Sir Anthony Denny had the unenviable task of suggesting that Henry might want to examine his royal conscience and make his peace with God.

“Henry spent time with his confessor and received Holy Communion.

“Henry proclaimed that he believed that ‘Christ in all His mercy’ would pardon him for his many sins, but even he acknowledged there was a lot of sin in his past.”