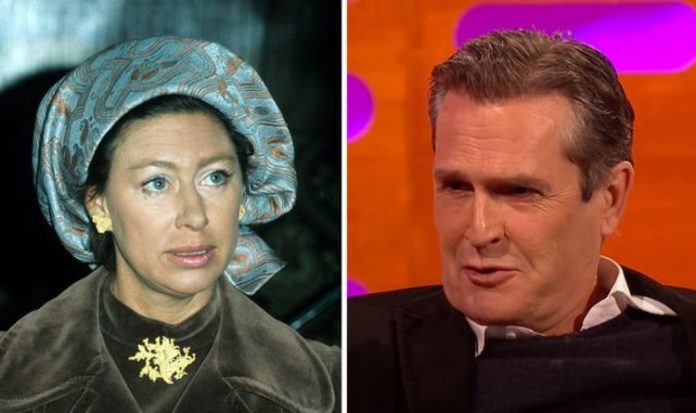 The actor revealed on The Graham Norton Show how he accidentally broke royal protocol while socialising with the Queen’s sister at Kensington Palace before a trip to the theatre with her.

The princess got a cigarette out and waited for Rupert to light it for her, but he didn’t realise this is what he was supposed to do.

There was a Rolex lighter on the table so he thought he was being offered a lighter, and said “don’t mind if I do” before lighting his own cigarette.

Rupert described this embarrassing moment on TV in 2015 after being asked about it by chat show host Graham Norton.

He also joked that he was never asked out again because she must have realised he was gay.

He said: “Well, yes I did go out for a night out with Princess Margaret, I went to the theatre with her once in about 1986.

“It was the two of us and her lady-in-waiting as well.

“I never got asked again, I must say, when she realised there were two princesses there and one of them was me.

“I remember one moment I was kind of chatting away at Kensington Palace before leaving for the theatre and she got a cigarette out and looked at me like this.

“And then suddenly I thought she was asking me if I wanted a cigarette so I said ‘ooh don’t mind if I do’ and I lit my cigarette and they all looked absolutely horrified and then I realised, I was like shhh.”

He said: “But she was great, she was like the Red Queen in Alice in Wonderland, so she had huge black hair and the Hanovarian bosom.

“And her dress rattled like casonetts, I don’t know what was going on, and she had cigarettes about this long [indicates about two foot long].

“When we were getting in the car, she said, ‘Oh you’ve got marvellous legs’ and then she called me Leggy all the way: ‘Leggy, do you mind if I grab you in the second act?’

READ  David Horncastle appointed as interim Chair of the SIA

“And we went to this little drawing room in the interval of the play to have a drink and the loo was right off the drawing room.

“And I could hear her and I was trying to have a pee and nothing was coming out, I was so nervous.

“And then she banged on the door and said, ‘Come on, Leggy!’

“So I had to sit through the whole of the second act without having had a pee.”

Comedian Greg Davies, who was also on the sofa on The Graham Norton Show, asked incredulously whether he was sure this was with Princess Margaret.

He joked that it sounded more like someone from the BBC soap Eastenders.

Rupert laughed, but insisted it really had been Princess Margaret.