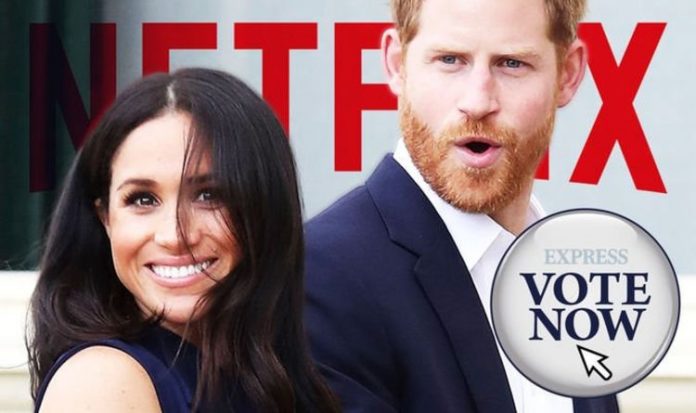 Meghan and Prince Harry’s post-royal future will see the couple producing a wide range of products exclusively for Netflix. Among the formats they are planning to be working on, there are documentaries, docu-series, feature films, scripted shows and children’s programming.

The Duke and Duchess of Sussex revealed yesterday they signed a deal with the streaming platform.

In a statement, the pair said: “Our focus will be on creating content that informs but also gives hope.

Speaking about the reach of Netflix, which counts 193 million subscribers around the world, the couple added: “It will help us share impactful content that unlocks action.”

Family, mental health and female empowerments are the topics Meghan and Harry are tipped to be covering with their programmes.

The creation of these shows will take place within a yet-to-be-named production company founded by the Duke and Duchess of Sussex.

This company will work independently from Archewell, the charitable foundation Meghan and Harry are working on behind the scenes.

Despite the Duchess’ past as an actress, Meghan is highly unlikely to resume her former career.

READ MORE: Meghan and Harry warned they ‘must be a success’ or won’t ‘survive’

Both the Duke and Duchess may appear in documentaries but won’t act in any of the shows they are to produce.

Speculation surrounding a possible deal between Netflix and the Duke and Duchess of Sussex started to circulate just a few weeks after Meghan and Harry announced their intention to step back as senior royals in January.

When the streaming platform’s chief content officer, Ted Sarandos, was asked whether he would court Harry and Meghan to appear on Netflix, he gave a telling answer, according to the Daily Mail.

At the time, the Duke and Duchess expressed their desire to retain their right to represent the Crown and the Queen around the world by carrying out royal duties.

However, the couple also wanted to become financially independent and pursue profitable ventures such as this deal with the streaming platform.

After the summit in Sandringham in mid-January between senior royals, the Sussexes and aides, the couple agreed on stepping down from royal duties to pursue financial ventures.

While Meghan is yet to debut on Netflix, Prince Harry appeared on the streaming channel on one of its original products in August.

The Duke starred in the documentary focused on parathletes and the origins of the Paralympics called Rising Phoenix.

The founder of the Invictus Games, an international sporting event which sees wounded and sick veterans competing against each other, said in the documentary: “There isn’t anything else in the world that can bring you back from the darkest places than sport.”

Speaking about Harry’s participation in this documentary, a spokesman for the Sussexes said: “The Duke is proud to have been one of the people contributed to this film, which is a unique and powerful documentary that hopes to change the way people view disability — and tell the incredible story of the Paralympics.”

Harry’s debut on Netflix came four months after the documentary narrated by Meghan, Elephant, was released on Disney+.

The Duchess of Sussex recorded the narration for this Disney programme focused on elephants and their migration across the Kalahari last autumn.

Just a weeks later, the Duchess, Harry and their son Archie headed to Canada for a six-week break.