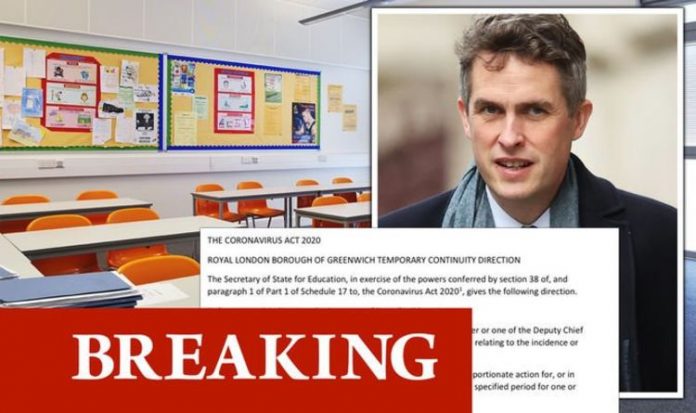 The minister has issued a “temporary continuity direction” to the Royal Borough of Greenwich. Mr Williamson has said the Government has the power to instruct the council to reopen schools under powers contained within the Coronavirus Act. Greenwich Council sent a letter to headteachers on Sunday, urging them to close schools from Monday evening and move to online learning for the rest of the term.

The move is in response to rising coronavirus rates in the borough.

But Mr Williamson has taken action against the Borough in bid to keep pupils in the classroom.

He said: “It is simply not in children’s best interests for schools in Greenwich, Islington or elsewhere to close their doors.

“Schools and colleges up and down the country in all tiers have shown incredible resilience in the face of this pandemic – and it’s down to the hard work of teachers and staff that millions of children and young people have been able to benefit from a face-to-face education and be with their friends.

“I have always been clear that using legal powers is a last resort but continuity of education is a national priority.

“That’s why I won’t hesitate to do what is right for young people and have issued a direction to Greenwich Council setting out that they must withdraw the letter issued to headteachers on Sunday.”

It reads: “The Secretary of State for Education is satisfied that giving this direction is necessary and proportionate action for, or in connection with the continued provision of education for the specified period for one of more persons.”

Mr Williamson is able to make the move under the Coronavirus Act, Part 1 Schedule 17.

If the council refuses to comply with the order, the minister could decide to make an application to the High Court or the county court for an injunction.

Cllr Danny Thorpe, the leader of the Royal Borough of Greenwich, has said the council is currently seeking legal advice and will respond to the Government in the morning.

He said in a statement published on the council’s website: “This evening we received a legal direction from the Government to withdraw our request to schools. We are in the process of seeking legal advice and will respond to the Government in the morning.

“We have alerted schools, and will speak to them tomorrow. But given we received this notification just before 5pm, it was impossible to ask schools to change any of the arrangements they have in place for Tuesday.”