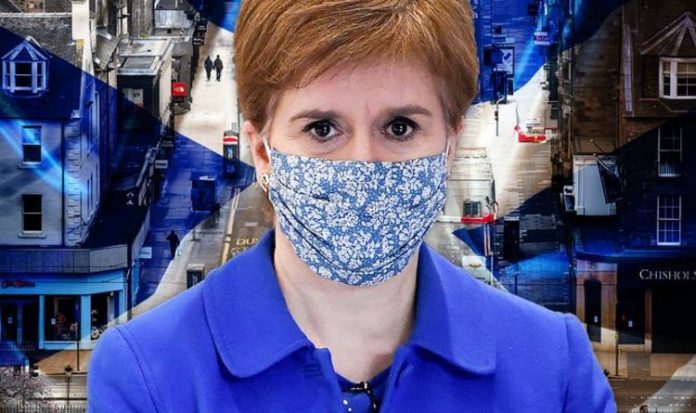 Scotland’s First Minister Nicola Sturgeon said a new COVID-19 “tipping point” has been reached requiring new restrictions in Scotland. Scotland has now gone several steps ahead of the rest of the UK with its coronavirus restrictions.

The First Minister told Good Morning Britain on Wednesday: “I’ve made a judgment that we are again at a tipping point with COVID.

“I’m looking at data that alarms me, frankly, and if we don’t act now, urgently and decisively, then we might find COVID running out of control again.

“So the judgment I’ve made, and it’s not an easy one, is that if we take tough action now we might actually manage to be under these restrictions for a shorter period of time than we will end up being if we delay that action.

“So these are tough judgments but I think, given the loss of life we know that COVID can result in, the health damage that it does, we’ve got to be prepared at moments like this, people like me, to take tough decisions, and to be prepared to do things even if they’re unpopular, for the greater good.”

This week the FM announced a ban on visiting other households as well as curfews for pubs and other hospitality venues.

The advice to work from home where possible remains in place, but no stay at home orders have been given.

All of the UK is now under renewed measures to try and stymie the spread of the disease following a resurgence of cases.

It is thought a second wave of infections, alongside the usual flu season coming into swing, will overwhelm the NHS and cause more deaths than before.

The UK currently has the worst coronavirus record in Europe, in particular England, which alone has seen over 35,000 deaths from the virus.

She has however said that “fast and urgent action” is required to beat down the virus.

She has also committed to going further than the rest of the UK if needed, saying: ”Hopefully this will be with four-nations alignment, but if necessary it will have to happen without that.”

Downing Street confirmed Prime Minister Boris Johnson had spoken on the phone to the first ministers of Scotland, Wales and Northern Ireland, and that they would be taking part in a Cobra meeting scheduled for Tuesday morning.

A spokesperson said: “They all agreed to act with a united approach, as much as possible, in the days and weeks ahead.”