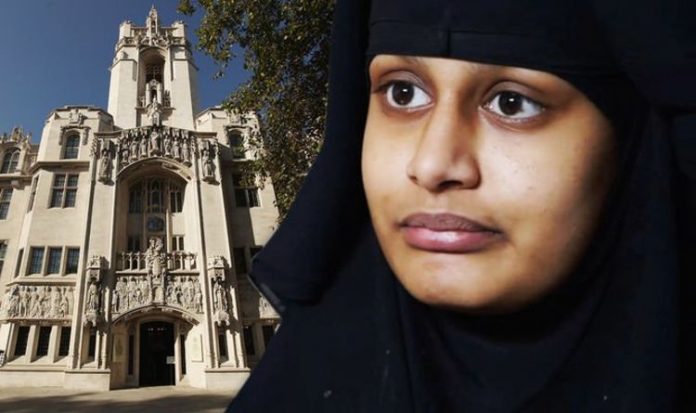 Her possible return to the UK is being considered by the Supreme Court today and tomorrow. The 21-year-old was one of three schoolgirls from east London who travelled to Syria to join ISIS in February 2015. But in February 2019, she was found, nine months pregnant, in a Syrian refugee camp after living under ISIS rule for more than three years.

In July, the Court of Appeal ruled: “The only way in which she can have a fair and effective appeal is to be permitted to come into the United Kingdom to pursue her appeal.”

Lord Justice Flaux, sitting with Lady Justice King and Lord Justice Singh, said: “Fairness and justice must, on the facts of this case, outweigh the national security concerns, so that the leave to enter appeals should be allowed.”

The Court of Appeal then gave permission for both the Home Office and Ms Begum to take their case to the highest court in the country, ordering a “stay” on her return “until further order by the Supreme Court”.

A remote hearing spread over two days will begin today, with the Supreme Court set to decide whether Ms Begum should be allowed to return to the UK to appeal against the deprivation of her British citizenship.

Five Supreme Court justices will also consider whether her appeal should be allowed if she is refused leave to enter the UK.

The Special Immigration Appeals Commission (SIAC) originally ruled Ms Begum “cannot play any meaningful part in her appeal and that, to that extent, the appeal will not be fair and effective”, adding “it does not follow that her appeal succeeds”.

But the Court of Appeal said earlier this year: “It is difficult to conceive of any case where a court or tribunal has said we cannot hold a fair trial, but we are going to go on anyway.”

Ms Begum, along with Kadiza Sultana and Amira Abase, then 16 and 15 respectively, left their homes and families to join IS nearly six years ago.

The three schoolgirls boarded a flight from Gatwick Airport to Istanbul in Turkey on February 17, 2015, before travelling on to Raqqa in Syria.

She added she left Raqqa in January 2017 with her husband but their one-year-old girl and a three-month-old boy had both since died.

Her third child also died shortly after he was born.

Separately, the SIAC will hear the cases of three people with British-Bangladeshi heritage whose British citizenship has been revoked on the grounds of national security.

The commission will hear appeals by two women, known only as C3 and C4, who like Ms Begum, also allegedly travelled to Syria from the UK to join ISIS.

The tribunal will hear an appeal brought by a man known only as C7 whose British citizenship was revoked earlier this year after he too allegedly travelled to Syria to join ISIS.

All three of these people claim the decision to remove their British citizenship rendered them stateless and was therefore unlawful.

This is a claim which has been denied by the Home Office.