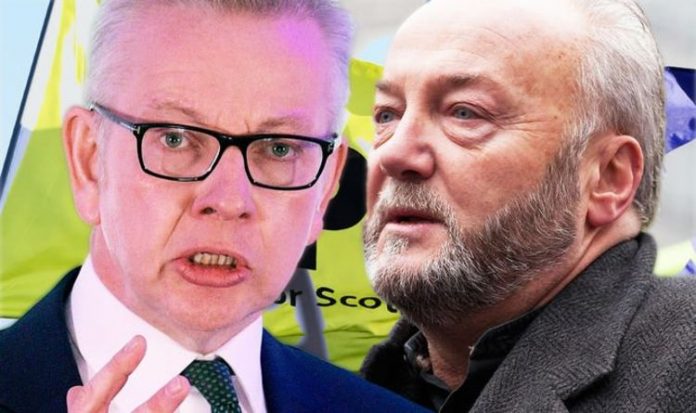 But Mr Robertson hit back on Twitter, writing: “With polls now showing a consistent majority in favour of Scottish independence its opponents in Westminster consider changing the electorate an ‘interesting question’.

Dundee-born Mr Galloway said “separatism must be answered by all Scots”.

The former Labour and Respect MP told his Twitter followers: “I’ll tell you this: IF there’s to be a second IndyRef, then 795,000 Scots living elsewhere in the UK MUST have a vote.

READ  Queen rules: The Queen's 'sacred duty' explained - would she ever step down? | Royal | News (Reports)

“If UK expats can vote in General Elections from Spain then an existential question like Separatism MUST be answered by all Scots.”

This was shared by Mr Gove, who simply wrote “interesting question”.

He dismissed the demonstration and said: “I think they’re just a few bampots who don’t speak for Scotland.

“You will always find some people in any situation who will engage in these sorts of stunts.

READ  Kickstart moves up a gear with over 120,000 jobs created so far and government making it even simpler for employers to join

“They don’t speak for Scots and I know that’s the view of the First Minister as well.”

The Twitter exchange comes after a recent poll showed support for Scottish independence has reached a record high.

The latest research by Panelbase found the results of the 2014 independence referendum – when 55 percent of Scots voted to stay in the UK – were reversed.

Pro-independence organisation Business for Scotland commissioned the poll, with chief executive Gordon MacIntyre-Kemp hailing the results as a “huge landmark” showing the “writing is very definitely on the wall for the union”.

Overall, 51 percent of those questioned said they support independence, 42 percent said they would vote to stay in the UK and 7 percent of voters were undecided.

When undecided voters were excluded, 55 percent favoured Scotland leaving the UK, with 45 percent preferring to stay in the Union.

Panelbase questioned a total of 1,011 people across Scotland between August 12 and 18 for the research.