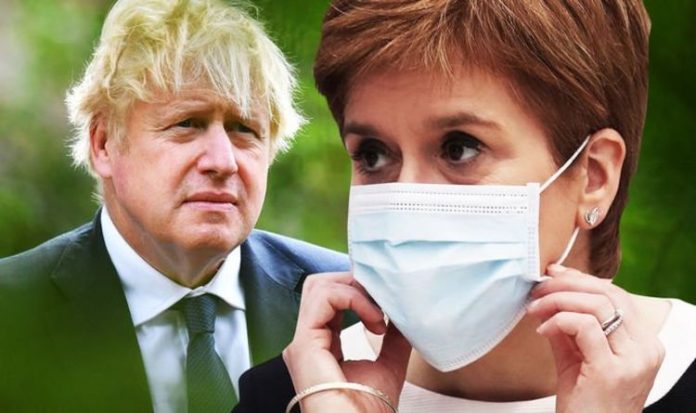 Support for Scottish independence now stands at 54 percent compared with 46 percent support for the union, according to a commissioned Panelbase poll. The surge in favour of secession has been put down to the SNP deliberately contrasting their coronavirus “agenda” to Westminster. Ghulam Sorwar, Professor of Finance at Keele Business School, explained to Express.co.uk why this is “nudging” a second referendum closer.

He said: “I think the impact of the pandemic on Scotland is actually going to be more political.

“Longer term, the issue with Scotland is what will the impact on a second Scottish referendum?

“The question is: is there is a second Scottish referendum, will it actually go in favour of secession?

“The current crisis is actually nudging it towards secession if there is a second referendum.”

“As far as the British Government is concerned, they have a particular agenda.

“The Scottish Government has another agenda and there is clearly a kind of difference of emphasis.

“I think this is just something that will have to work itself out.”

Polling guru Sir John Curtice gave some insight: “Intriguingly this isn’t just a case of those people who are already committed to independence, those who are already backing the SNP saying, ‘Nicola’s done well and Boris hasn’t done so well’.

“I think it’s certainly true that the tone of the Scottish Government, and of Nicola Sturgeon in particular, during the course of the coronavirus outbreak has been markedly different from that of the UK Government.

“But certainly Nicola Sturgeon has seemingly been talking to people on the level.

“She’s been saying, ‘things are going to be difficult, I’m going to worry about some of the decision I’ve made maybe for the rest of my life’.”