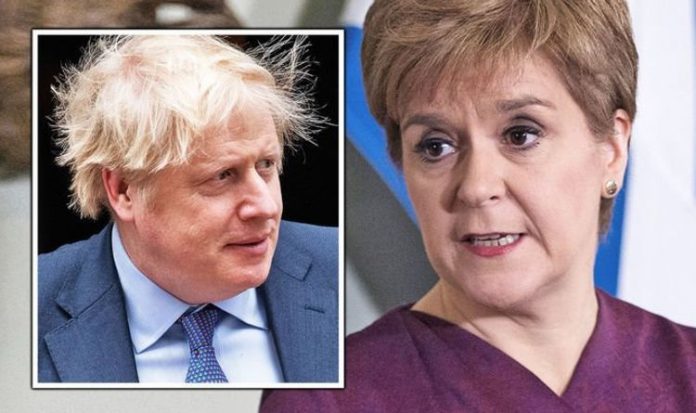 A YouGov poll of 1,134 Scottish people found more than half (54 percent) of SNP voters don’t want English tourists to be able cross the border. This compares with just over a third (37 percent) Scottish Labour supporters and 19 percent of those who voted for the Scottish Conservatives in last December’s general election. Just over half (52 percent) of Scots who voted “Yes” in the 2014 independence referendum also oppose letting in English tourists without entering a period of quarantine, while 55 percent of “No” voters support allowing English tourists into Scotland.

Overall, 47 percent of people quizzed in the poll supported English tourists being able to enter the country without a period of isolation.

More than a third (34 percent) of SNP voters support the current system of allowing English voters to cross the border without requiring them to quarantine, as opposed to 49 percent of Labour voters and 65 percent of Tory voters.

The poll was carried out as Scottish independence supports step up their campaign for the country to split from the rest of the UK, with a protest at the border demanding people from England be banned from entering or to impose a mandatory quarantine period.

But the YouGov survey also found those polled are more in favour of people from the remaining UK nations being able to visit Scotland.

SNP voters have demanded English tourists be banned from crossing the border to Scotland (Image: GETTY)

Just over a quarter (29 percent) are against people coming from Wales, with that figure dropping slightly to 28 percent for those visiting from Northern Ireland.

But despite the lack of support for English tourists visiting Scotland, this the opposition for allowing unrestricted travel for Danish, Swedish, German, Spanish, Italian, Chinese and American tourists grows significantly.

Just one in ten (10 percent) of those polled back allowing US tourists into Scotland without having to enter a period of quarantine.

Nicola Sturgeon is fighting to bring the coronavirus crisis under control in Scotland (Image: GETTY)

Elsewhere, just 36 percent of Scots would consider going to England on holiday this year, with that figure falling to 32 percent for Wales.

The poll also showed Welsh people are slightly more willing than Scots to accept travellers from the rest of Britain.

Just over a third (37 percent) are opposed to English visitors into their country, compared to half (50 percent) who would welcome them.

But like Scotland, political persuasion also plays a big part in this, with 54 percent of Plaid Cymru voters opposed to English travellers compared with 44 percent of Labour supporters and 24 percent of Tory voters.

The survey also looked at whether Scottish and Welsh people would be willing to cross any borders throughout the world for a summer holiday this year.

Just under half (49 percent) of Welsh respondents would be in favour of travelling to England, with this falling to 43 percent for travelling north of the border.

More than 46,000 people in the UK have died from coronavirus (Image: EXPRESS)

But both are unlikely to consider going to Ireland or Northern Ireland on holiday, with only a quarter saying they would cross the Irish Sea for a visit to the two countries.

Support for travelling to countries around the world plummets and among both national groups, only 10 percent and 12 percent respectively would visit any of the countries in Europe.

China and the US – which have both found themselves centre stage during the coronavirus crisis – are even less appealing.

Just five percent of Scots and six percent of Welsh people would consider going to the US, with the figure for China falling to two percent and three percent respectively.