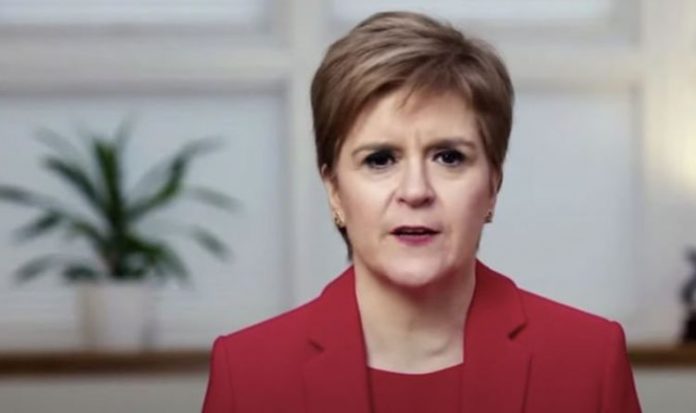 Polling in recent months has laid bare the momentum being generated by the SNP in Scotland as support for independence grows. Numerous surveys have shown support for a break from the union at above 50 percent, with one polling a Yes vote at 58 percent. The SNP look set to dominate in Scottish elections next May, which could be a major boost in Ms Sturgeon’s pursuit of independence. The Scottish Labour Party are certainly not fancied to compete, with former MP Tom Harris telling his old colleagues to “write off” the election in Edinburgh next year.

He described the current leader – Richard Leonard – as a “busted flush”.

Meanwhile, the Scottish Conservatives are plagued by internal divisions.

Former First Minister, Henry McLeish, made a dire warning for the Tories in Scotland as an “almighty civil war” threatens to douse any election hopes.

He added that “the Tories are in deep trouble and their position on the constitution cannot survive”, referring to comments made by Scottish Conservatives leader Douglas Ross after he criticised Prime Minister Boris Johnson for branding devolution a “disaster”.

And now, former SNP MP Angus Robertson has said that “every single constituency seat is a realistic prospect” for his party to win in May’s vote.

He did add in his column for the Edinburgh Evening News this month that polling success and election success are very different things, and that coronavirus could “throw a spanner in the works”.

He said: “I’ve said many times that I’m in this to win this, it’s absolutely vital that I do everything that I can to ensure the Scottish Conservative policies that I’m developing, our team are bringing forward, that I think can really make a difference to people right across Scotland have every opportunity to be enacted.