Early in 2001, Sophie’s company was approached by an Arab businessman seeking public relations.

However he was actually an undercover journalist, Mazher Mahmood, who was slowly building a career out of tricking celebrities into making embarrassing confessions.

The Fake Sheikh was an investigative reporter with the now defunct News of the World.

He often dressed up as a sheikh as part of an elaborate sting to entrap the people he was interested in trying to expose.

Sophie let down her guard and reported to have made unflattering comments about leading figures of the day, including the then Labour Prime Minister and the Queen.

Journalist Ayesha Hazarika said: “To have just dished the dirt in front of somebody they didn’t really know, he was just a prospective client, was incredibly naive and it had terrible consequences.

“Of course it was a huge story and a very painful lesson for her to learn.

“But the fact that she was able to be rehabilitated after that incident shows just how highly valued she was and still is in the Royal Family.”

She was asked about Charles and Camilla, and she said that a lot of people didn’t want Camilla to be Queen, but when the Queen Mother died he would certainly marry her.

The Queen was reported to be upset by the incident.

However, she gave her full support to the Wessexes.

In an unusual move, Buckingham Palace stepped in to defend the Countess and her husband.

A statement read: “The Queen deplores the entrapment, subterfuge, innuendo and untruths to which the Earl and Countess have been subjected in recent days.” 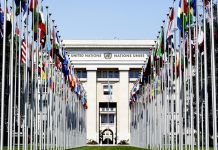 UN Human Rights Council 45: Interactive Dialogue with the Commission of Inquiry on Burundi