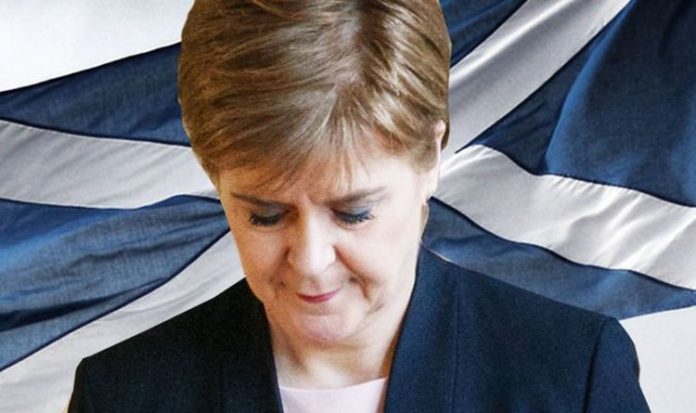 First Minister Nicola Sturgeon is facing continued calls to resign following a decision to reduce the exam pass rate which has on average impacted the poorest pupils by more than twice that of the richest. And now it has emerged her secondary school Greenwood Academy in North Ayrshire was significantly marked down.

Ms Sturgeon’s former school reported 37 percent of the final results were downgraded by one grade from teacher’s original estimates.

This means if the same scenario happened at the time Ms Sturgeon was at school, she may not have gained the results to go to the prestigious University of Glasgow as a result.

“A young Nicola Sturgeon might not have made it to Glasgow Uni this year as a result.”

With no exams this year due to the coronavirus pandemic, the Scottish Qualifications Authority’s (SQA) introduced a moderation process, which saw the pass rate of pupils in the most deprived data zones reduced by 15.2 percent from teacher estimates.

In contrast, the pass rate for pupils from the most affluent backgrounds dropped by 6.9 percent.

During today’s coronavirus briefing, Ms Sturgeon apologised for the system, admitting “we did not get this right”.

She said too much focus was given to the system rather than individuals and apologised to those affected – seeming to acknowledge those in more deprived areas were hardest hit.

Ms Sturgeon said Education Secretary John Swinney will set out a plan to rectify the matter at the Scottish Parliament on Tuesday.

She said: “We will be taking steps to ensure that every young person gets a grade that recognises the work they have done.

“Our concern – which was to make sure that the grades young people got were as valid as those they would have got in any other year – perhaps led us to think too much about the overall system and not enough about the individual pupil.

“That has meant that too many have lost out on grades that they think they should have had and also that that has happened as a result of not of anything they’ve done but because of a statistical model or an algorithm, and in addition that burden has not fallen equally across our society.”

Mr Swinney has also faced calls to resign from opposition parties, with Scottish Labour set to mount a no-confidence vote against him in Holyrood and the Conservatives saying they will support it.

The First Minister reiterated her support for her deputy at the briefing.

She said: “When we get things wrong, I want to be able to stand here and acknowledge that and put it right, because I think fundamentally that’s better than simply digging our heels in and trying to defend a position we think in our hearts we didn’t get right.