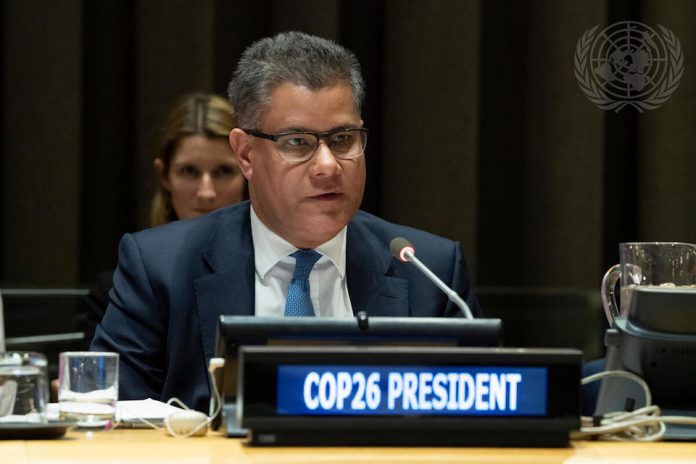 Remarks by Rt. Hon. Alok Sharma, COP26 President-Designate, at the virtual briefing on updates to preparations for COP26

Thank you Ambassador, Excellencies, Secretary-General, friends. It is a real pleasure to speak to you all again to provide this regular update.

As you know, I’m now devoting all of my time and energies to the role of COP President-designate whilst continuing as a full member of the UK government cabinet. And I hope what this tells you is the seriousness with which Prime Minister Boris Johnson and indeed the whole of the UK government are taking our role as the incoming COP presidency.

And it recognises the stark facts in front of us – the facts, as the Secretary-General has just outlined, and the urgent need to use our collective ambition across all elements of the Paris Agreement.

2020 saw record temperatures. We saw fires raging across the world. We saw storms intensify. In short, my friends, the climate crisis is closing in.

But as the Secretary-General noted, we are seeing some acceleration in climate action despite the pandemic. And of course, at the Climate Ambition Summit that the UK held together with the United Nations and France in December, we heard from 75 world leaders who announced between them 45 nationally determined contributions, 24 net zero pledges and 20 adaptation commitments, with many of the countries most vulnerable to climate change leading the way. So I want to thank you, every one of you, who took part.

By the end of 2020 net zero was firmly established as the law. And if you take into account President Biden’s recent announcements, over half of G20 countries and around 70 percent of global emissions are now covered by net zero targets. And I hope I speak for all of us when I say welcome back to the USA in our shared fight against climate change.

As I said at the Climate Ambition Summit, all this commitment is welcome, but it is not enough to meet the ambitions of the Paris Agreement – ambitions which we have collectively agreed. So let’s be frank with ourselves. We still have some way to go. We are, as the Secretary-General said, way off target. And we need to do more and we need to do it urgently.

So in my speech at the close of the summit, I outlined four goals that I want us to work towards to get the world on track to make Paris a reality. Today I want to say a little bit more about how we can do this.

First, we need to secure that step change in emissions reductions. We all know what we need to do here. This isn’t new. This is about net zero targets with aligned NDCs that keep us 1.5 degrees within reach, and policies like phasing out coal power, as the Secretary-General said, to show that we are serious.

Secondly, we must strengthen adaptation. I really welcome the Secretary-General’s leadership here. And, of course, the Climate Adaptation Summit, which was held by the Netherlands last month, where Prime Minister Boris Johnson also launched the new Adaptation Action Coalition. And as you will know, this has been developed by the UK and our friends in Egypt and Bangladesh and Malawi, the Netherlands, St Lucia and the UN, together with our Group of Friends on Adaptation and Resilience in New York.

The aim is to convert the political commitment generated through the call to action, which I was part of launching in 2019 at UNCAS, into practical reality. And I urge all countries to join this coalition. Please sign the call to action if you have not already done so, and as well as to focus on effective adaptation planning and setting out progress in adaptation communications.

Our third goal, an absolutely vital one, is to get finance flowing – both public and private – particularly to developing countries and especially to adaptation.

My message could not be clearer. Progress on public finance has sadly been too slow – woefully slow, say our friends in countries on the front line of having to deal with climate change. My fellow donor countries need to step up and deliver the $100 billion a year in international climate finance that we have promised. As I’ve said before, this is a matter of trust and we must deliver.

Last month, the UK COP presidency published our public finance priorities, and we want to work with all of you to make progress on these vital issues. And I’m also working to get both public and private finance moving.

To make further progress in this area, the UK’s COP presidency will hold a Climate and Development Ministerial at the end of March, and we will bring together ministers representing donor countries and countries vulnerable to climate change to establish how we can remove barriers to climate action and development. Together, we will look at four vital issues: access to finance; quantity and predictability of finance; the response to impacts; and fiscal space and debt.

And we will plan to make progress on each of these areas through events like the G7, the IFI spring meetings and, of course, the UN General Assembly. And discussions will be informed by experts and civil society groups, and we will be working with regional chairs to make sure all regions are represented. The event will also be open to observers from countries who are not directly participating.

The fourth and final goal is to enhance international collaboration around critical challenges in sectors to make progress faster. Our COP26 campaigns have established new forums like the Energy Transition Council and the Zero Emission Vehicle Transition Council, which met for the first time last year. We also have the Forest Agriculture and Commodity Trade Dialogues, which were launched publicly last week. And I have to say we have seen a real appetite for cooperation, so thank you to all of your countries and governments for taking part. And on all four of these goals, major economies must show leadership. And let me confirm to you that the UK will use its G7 presidency to urge them to do so, as, of course, will our Italian partners with their G20 presidency.

Of course, the multilateral negotiations are at the heart of our plans. They underpin each of the four goals that I’ve outlined and are absolutely key to fulfilling the Paris agreement.

So we must test solutions and prepare the ground ahead of COP26 so that we arrive in Glasgow ready to close a deal. Last year we did make progress virtually despite the pandemic. We had events like the UN Climate Change Dialogues and others.

This year cannot simply be a repeat of the last, as the Secretary-General has outlined. We may not be able to meet in person for some months, but we know that we need to make progress faster.

And so we need to see creative ways of conducting our discussions that have inclusivity at their very heart. And I am therefore consulting with the chairs of all the UNFCCC negotiating groups and meeting international partners to understand their positions.

As Ambassador Woodward pointed out, I recently visited Ethiopia and Gabon, and I will continue to travel where possible.

With our friends in Chile, we have initiated new monthly meetings, bringing together heads of delegation from every country to chart the course to Glasgow together and to find possible solutions to negotiating issues.

Friends, I have to say this: this is a joint endeavour, an endeavour between all of us together. So we are working with the UNFCCC to support parties’ connectivity. We are holding meetings that respect different time zones and we are discussing how technology can help us move forward together.

We must continue to work creatively and flexibly, guided by the principles of transparency, inclusivity and common purpose to make progress, which is so vital. So that when we do meet in person in November we secure an outcome that delivers for each and every country and that delivers for our planet as a whole. And I look forward to working with all of you throughout 2021 to achieve this.

We all know what is at stake if we do not work now to secure the right outcomes at Glasgow. Let me remind you, we have 266 days to go to COP26. Please, let’s work together. Let’s make sure that every one of those days count.