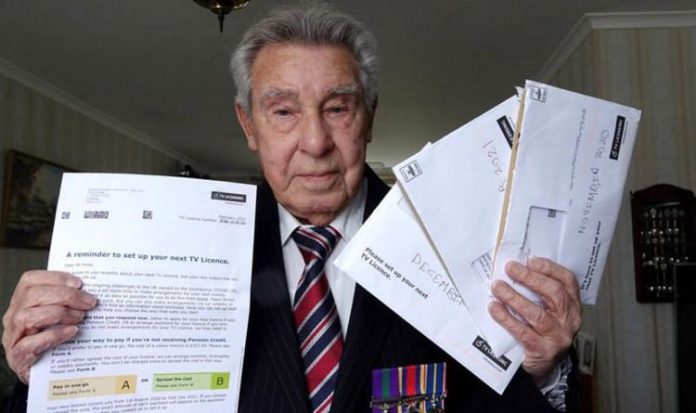 But despite providing evidence of his impairment he continued to be chased for the full £157.50 fee. The widower has been left unable to sleep because he is terrified of a knock at the door from bailiffs. He said: “I think about it during the day and I wake up in the middle of the night worrying about it. “It’s causing me a lot of distress. What I don’t understand is that in the last letter I received they started using the word ‘legal’.

“I don’t know whether I might get the bailiffs knocking on the door anytime soon and that concerns me.

“This is the way I am being treated for serving my country.

“Right from the word go I sent them an email asking how much I needed to pay. It’s not as if I am refusing to pay. I understand I have to. I feel like I am being bullied and treated like an idiot.

“I have spent all my life obeying the law and I need help, but they are not doing their job properly.They are just not fit for purpose. I am getting a letter every month. It’s ludicrous.”

David served with the Royal Army Service Corps and saw action with the Seaforth Highlanders during the Malayan Emergency in 1948.

The father of two was married for 66 years and looked after wife Daphne as she battled dementia.

But as he struggled with his sight she was forced into a care home before dying 18 months ago. After over-75s were forced to pay for a TV licence, David received an email saying he was eligible for the halfprice concession yet he continued to receive demands for the full amount.

He said: “I can look after myself and do a little cooking. But the TV is vital – it is my only entertainment.

“I can’t see it properly but I listen to quiz programmes and enjoy the news. It’s my window on the world.”

David contacted TV Licensing last September asking how he could obtain a discount and was told to send proof. He submitted a photograph of his council registration card but was told it was insufficient.

Officials insisted he send a picture of the back of the card, which simply states a council address.

David, of Crawley, West Sussex, obliged and received acknowledgment but the demands continued.

He took their letter last week as a threat as it stated: “Your new licence has not yet been set up.

“It’s a legal requirement to be covered by a TV licence.”

Crawley MP Henry Smith said:”I think it’s outrageous. It should be abundantly clear to TV Licensing that Mr Frost is exempt from the full charge and they should leave him alone. They seem to be obsessed, either through technical errors or distrust, and that’s disgusting.”

The BBC has pushed for confirmation of David’s situation (Image: Getty)

Nick Caplin, of Blind Veterans UK, added: “The rules are quite clear, if you are registered severely sightimpaired then you are entitled to a blind concession TV licence.”

TV Licensing apologised and blamed an administrative error. A spokesman said: “[David’s] application has now been accepted and he will receive a half-price licence.” The BBC said most over-75s were now aware they needed to pay for a TV licence and the “majority have been set-up easily”.

Over-75s are exempt if they receive Pension Credit. It is thought around 900,000 people receive this benefit, but it is estimated a further 1.5 million who are eligible for it do not claim.

More than 84 per cent of customers have made arrangements. The broadcaster said more than 2.7 million over-75s licences had been bought and it had received 750,000 free licence applications.

Over-75s are exempt if they receive Pension Credit (Image: Getty)

A spokesman said: “The majority of these customers have been set-up quickly and easily, without issue.”

More than 1.8 million people – more than 65 per cent of those who have bought a licence – have chosen to pay in one go.

MoneySavingExpert website said: “Many of the UK’s poorest fail to claim Pension Credit, even though it’s worth an average of £60 a week in its own right. We’re reminding you again as claiming also makes you eligible for other discounts on many bills.

“Plus it entitles you to heating help when it’s very cold, which 300,000 pensioners got in this month’s cold snap. But Pension Credit is not automatic and about one million who are eligible don’t claim.”