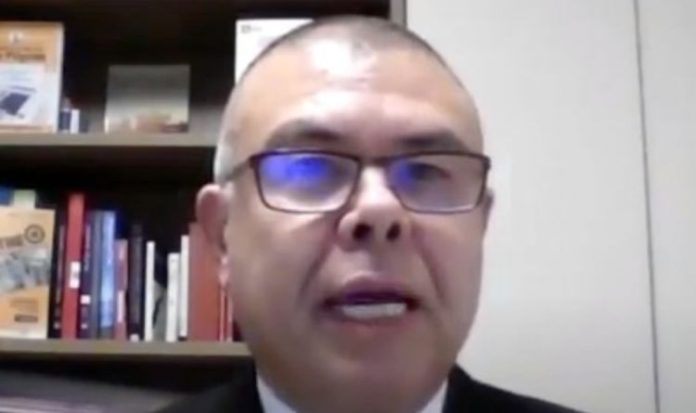 Jonathan Van Tam was speaking at the Government’s coronavirus briefing when he made the comments on Friday night. Referring to advice issued by Public Health England (PHE) that for every day of easing of restrictions there would need to be a further five days of harsher measures on the other side, he said: “The Government clearly wants to give us a break at Christmas. But there is no magic number about one day at Christmas, ten days of payback in terms of lockdown.

“It’s partly about the proportionate measures that the Government will take in allowing us to have a sensible Christmas but also whether we comply and whether we follow the rules that are then put in place for that period.”

Prof Van-Tam continued: “If people don’t, then the first scientific principle is things will go back again.

“That’s the real message, that there’s a dual responsibility here and there’s no magic number about how many days this is going to cost us.

“We shouldn’t put it that way.”

JUST IN: Covid vaccine has ALREADY been looked at by UK regulator – decision on Pfizer jab in days

The lockdown currently in place across England is due to be reviewed on December 2 but speculation has arisen about a potential extension of the measures.

A spokesman for the British Government has however suggested Prime Minister Boris Johnson is now looking at plans that would allow Britons to spend the Christmas period with their loved ones in exchange for further restrictions in the new year.

The spokesman said: “We are looking at ways to ensure that people can spend time with close family over Christmas at the end of what has been an incredibly difficult year.”

Talks with the devolved administration in Scotland, Wales and Northern Ireland are also said to be progressing to ensure a UK-wide approach is adopted in the coming weeks.