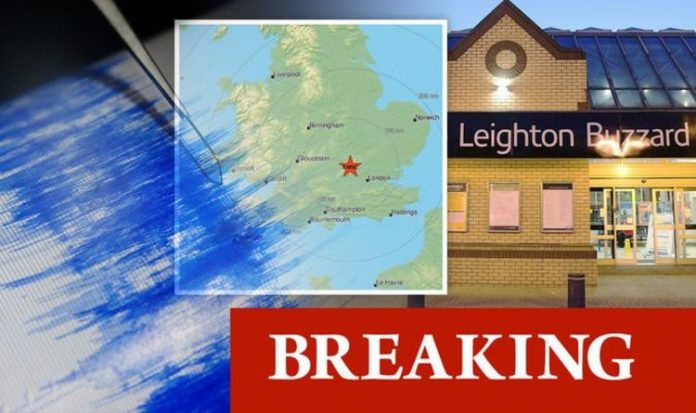 Leighton Buzzard, which was struck on September 8, is again at the centre of the action.

The European-Mediterranean Seismological Centre earlier said the magnitude 3.6 earthquake hit at 9.32am and had a depth of five kilometres, but later downgraded this to a magnitude 3.1 tremor.

The tremor struck 16 kilometres north east of High Wycombe, and 14 kilometres west of Hemel Hempstead in nearby Hertfordshire.

The British Geological Survey had initially tweeted: “We are getting reports of an earthquake in the Leighton Buzzard area this morning.

“We are currently investigating this and will update you as soon as we can.”

But the BGS then confirmed the earthquake, and said the magnitude 3.0 tremor had a depth of 10 kilometres.

Twitter users reported the shaking shortly after 9.30am this morning.

One said: “Was that another earthquake in Leighton Buzzard? Anyone else feel that?”

Another said: “Yup. Rattling the crockery in the kitchen cupboards!”

A third said: “Why does this keep happening?”

One person tweeted: “Just had another earthquake in Milton Keynes – just like the one on 8th September, but not quite as strong.”

Another commented: “Did anyone just feel an earthquake in the luton area? Or should I be worried about our flats?

“Apparently there has been another one.

“It wasn’t much here, a tremor, but jeez they feel so wrong.”

Glenn Ford, a seismologist with the BGS, said there has “been some stress building up in that particular area” and warned “we certainly could” experience another aftershock.

He told the PA news agency: “What we’re seeing here is a small aftershock from that earthquake (on September 8).”

The seismologist said it was “typical behaviour” which had been seen in different areas of the UK “on many occasions”.

He added: “There’s obviously been some stress been building up in that particular area and we’ve had the initial earthquake.

“It’s maybe just still rebalancing the stress regime in that particular part of the world and we’re getting these little aftershocks occurring as well.

“It probably will settle down soon but could we get another one? We certainly could, but when it could happen, we don’t know.”

Residents in Aylesbury in Buckinghamshire, Hertfordshire, Leighton Buzzard in Bedfordshire and Slough in Berkshire reported feeling the quake and their “whole house shaking”.

Initial data on the British Geological Survey website suggested a magnitude 3.3 earthquake hit at around 8.45am with a depth of 10 kilometres.

The LastQuake app, run by the European-Mediterranean Seismological Centre (EMSC), said the earthquake was in fact magnitude 3.9.