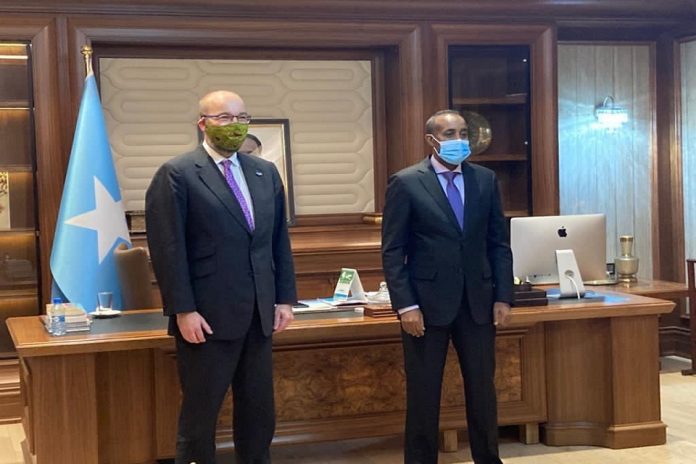 UK Minister for Africa, James Duddridge MP, visited Mogadishu this week where he underlined the UK’s continuing commitment to Somalia’s long-term security and stability, and the world’s poorest, with new UK support worth £21.8 million ($29.2 million).

In the first visit to Somalia by a UK government Minister since the start of the COVID-19 pandemic – and the first visit since the UK created a single Foreign, Commonwealth & Development Office to bring together diplomacy and development – Mr Duddridge met President Mohamed Farmajo and Prime Minister Mohammed Roble. They discussed the upcoming federal elections, including the importance of timely and inclusive elections, as well as progress on economic and security sector reform.

In discussions on UK support for Somalia’s operations against Al-Shabaab, the Minister announced new UK contributions to support the Somali Security Forces worth £1.6 million ($2.15 million) to counter the threat from roadside bombs.

The Minister met British troops training the Somali army, and reiterated UK support for the African Union in securing and protecting regional stability. He said that the UK would contribute a further £3.37 million ($4.5 million) for the Somali Security Forces engaged in joint operations with the African Union Mission to Somalia (AMISOM).

The Minister also met development and humanitarian partners working to protect the resilience, health and stability of Somalia’s communities – and announced a comprehensive package of UK support.

The UK is a proud partner on Somalia’s journey towards stability and security – from British troops training alongside the Somali Army, to the life-saving UK aid programmes that are safely delivering babies and vaccinating against disease, as well as providing those in desperate need with food assistance.

We remain committed to African efforts to secure and protect regional stability, and today I can announce new UK support to those working alongside the African Union’s peacekeeping mission here in Somalia. Working together, we can tackle the forces who threaten stability across East Africa and around the world.