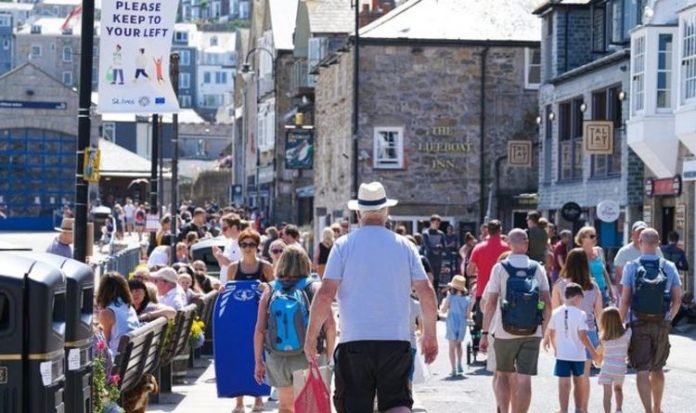 Official data from NHS England points to a huge drop in the number of coronavirus patients being treated in hospitals today compared to mid-April, during the height of the pandemic. One top doctor in Birmingham, one of the country’s hardest-hit areas, noted the “huge downturn” in Covid admissions. Dr Ron Daniels said last Thursday there were only three critically ill coronavirus patients across three hospitals which serve half of Birmingham’s one million residents.

Dr Daniels day Times: “Compare that to where we were a couple of months ago, when we had almost 200 patients ventilated at any one given time, and this is a huge downturn.”

Dr Daniels also said he does not expect an increase in hospital admissions and a second wave to hit the UK.

He explained: “I think that’s highly unlikely because the pubs have been open for over a month, people have been socially interacting heavily during that time, and the natural history of this disease is that if you contract the virus and you’re going to end up in hospital, you’re pretty much in hospital within 15 days of contracting it.”

Caregivers in England are now tasked with treating around 700 patients per day.

This is in stark contrast to the numbers seen in hospitals four months ago, recorded as about 17,000 a day.

The drop of 96 percent since the peak of the UK’s epidemic should ease fears of a deadly second round of the crisis.

This marked a 99 percent decrease from the 866 deaths declared by NHS England on April 10 – the day with the highest number of deaths since the beginning of the outbreak.

On Sunday a further 10 people who tested positive for coronavirus died in hospital in England, bringing the total number of confirmed reported deaths in hospitals to 29,411, NHS England said.

The patients were aged between 45 and 89 and all had known underlying health conditions.

Two deaths were reported with no positive COVID-19 test result.

The region with the highest number of deaths was the Midlands with four.

There were three deaths in the North East & Yorkshire, two in the East of England and one in London.

There were no deaths reported in the North West, where local lockdown measures in place in Greater Manchester and parts of east Lancashire were extended on Friday to include Preston.

Authorities in Preston are targeting young people with their advertising campaigns to urge people to abide by social distancing rules.

The slogan “Don’t kill Granny” is being used to remind youngsters that the elderly generations are more at risk of dying of the virus than their own age group.