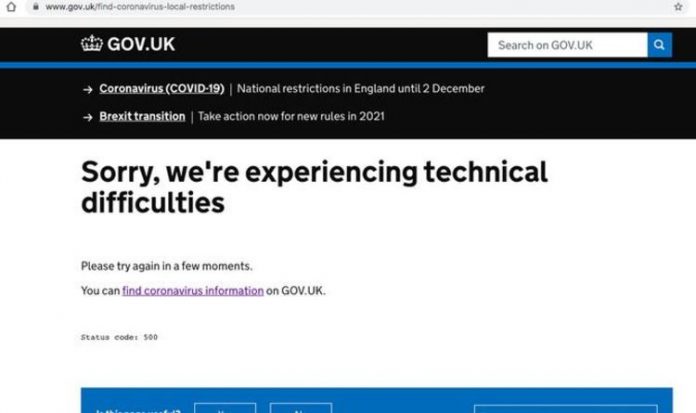 The Government were left red-faced after the website revealing which tiers areas in the country will be placed in as lockdown lifts next week crashed. All 32 London boroughs were placed in Tier 2 meaning household mixing is restricted to only those in support bubbles.

However, before the announcement the Government’s postcode checker website was launched briefly before it then crashed.

Before crashing, it initially showed that Kent would be in the toughest Tier 3.

London will be under Tier 2 restrictions when England’s national lockdown ends next week, according to the Government’s postcode checker.

Mr Hancock said “these are not easy decisions, but they have been made according to the best clinical advice”.

He told MPs: “Thanks to the shared sacrifice of everyone in recent weeks, in following the national restrictions, we have been able to start to bring the virus back under control and slow its growth, easing some of the pressure on the NHS.

“We will do this by returning to a regional tiered approach, saving the toughest measures for the parts of the country where prevalence remains too high.

“Regardless of your tier, I ask everyone – we must all think of our responsibilities to keep the virus under control we should see these restrictions not as a boundary to push  but as a limit on what the public advice says we can safely do in one area.”

READ MORE: How to check your tier NOW -postcode checker pinpoint Tiers 2 and 3

There are currently only three regions in Tier 1 (medium tier) including Isle of Wight, Cornwall and Isles of Scilly.

Those in the high alert aka Tier 2 include Cumbria, Liverpool City region, warrington, Cheshire, York and North Yorkshire.

In the Midlands, Worcestershire, Herefordshire and Shropshire and Telford and Wrekin have all been placed in on high alert.

The Rutland and Northamptonshire regions as well as Suffolk, Hertfordshire, Cambridgeshire, Norfolk and Essex, Bedfordshire and Milton Keynes are in Tier 2.

Those in Tier 3 (very high alert) include the Tees Valley Combined Authority such as Hartlepool and Middlesbrough as well as the North East combined authority including Sunderland and Newcastle upon Tyne.

Greater Manchester, Lancashire, Blackburn with Darwen and Blackpool all remain in Tier 3.

Leicester has been placed in Tier 3 (Image: PA)

The Humber, West and South Yorkshire are also in the highest tier.

According to the government website, the decisions on which areas go into which tier depends on five key epidemiological indicators.

They are also decided through the positivity rate – the number of positive cases detected as a percentage of tests taken – and the pressure on the NHS.

Those in Tier 3 should not mix households indoors or in most outdoor places, which hospitality venues closing except for takeaway, drive-through or delivery.

People are also urged not to travel outside their area other than where necessary.

In Tier 2, only those in support bubbles can mix households, with the rule of six still applying outdoors.

Pubs and bars must close unless operating as restaurants while alcohol can only be served with substantial meals.

Mayor of Liverpool Joe Anderson tweeted: “Tier 2 is good news for our city but we can’t afford to be complacent.

“#Covid19 rates are coming down and we are leading the way nationally, but they are still high compared to August, for example.

“We must still look after each other and #savelives “