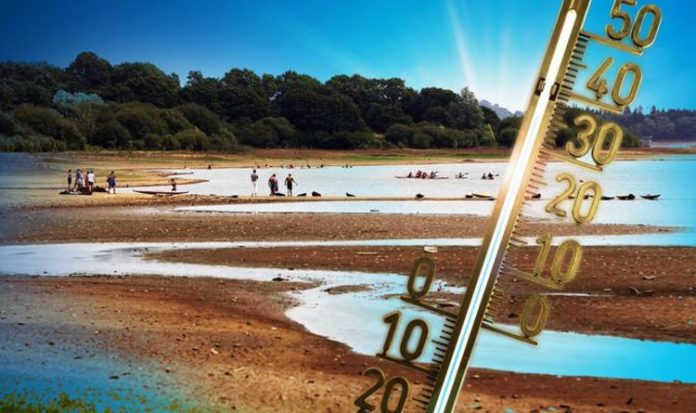 With large areas of the UK sweltering in temperatures in the mid-30s, and Friday proving the hottest day in 17 years as the mercury tipped 36C, Affinity Water has issued a plea to residents of Clacton-on-Sea to conserve dwindling supplies. The company is currently facing the highest levels of demand in its 130-year history.

A statement carried on the company’s website warned of impending problems.

Affinity explained: “Because of the warmer weather and with a lot of us spending more time at home, many of us are using much more water.

“This means you may notice lower pressure or no water when demand is higher in your area.”

Engineers were working “around the clock” to ensure there was enough water for the community, the company said.

Affinity added: “There is enough for everyone if we all use only what we need.

“You can help your community by using less, which will make a big difference, meaning there’s more to go around.”

READ MORE: ‘Why should WE pay?’: Sailor’s fury at France’s £30m migrant demand

In some areas Affinity was tankering (pumping water directly into local supplies), while in others it was rezoning (providing water using different mains).

Every effort was being made to get both water pressure and supply back up to normal, the company stressed.

However, it added: “It is possible you may see further impacts to your pressure/supply if we see higher water use than normal in your area.

“Life has changed so much since the COVID-19 outbreak and with many more of us at home we have seen a big increases in the demand for water at times over the summer.

“It was the driest May on record in England this year and the sunniest start to Spring since records began in 1929.

“This drove record demand for water. In fact, we had never seen this level of demand in our 130-year history.”

Britain’s largest water supplier, United Utilities, yesterday admitted it was having difficulties keeping pace with demand in the hot weather.

Meanwhile Yorkshire Water has urged its three million customers to shower for no more than four-minutes to avoid a hosepipe ban.

No hosepipe bans are currently in force in the UK, according to hosepipeban.org.uk

On Friday it was reported parts of the UK were in danger of running out of water supplies in the next 20 years.

Pointing the finger at utilities companies, chairwoman of the Commons Public Accounts Committee Meg Hillier said: “It is very hard to imagine, in this country, turning the tap and not having enough clean, drinkable water come out – but that is exactly what we now face.

“Continued inaction by the water industry means we continue to lose one fifth of our daily supply to leaks.”