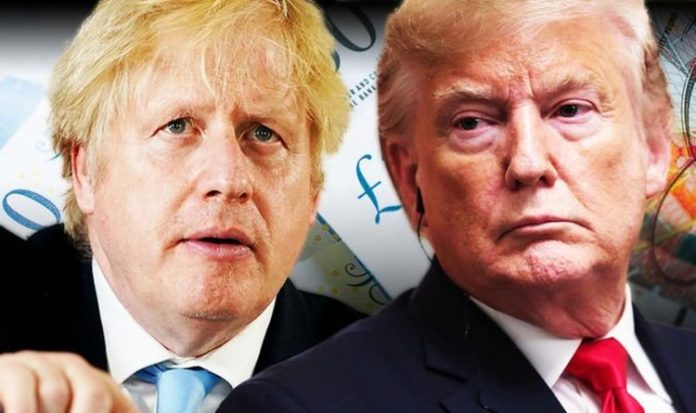 The US election and everything that comes with it entered a new stage of intensity after the incumbent, President Donald Trump, tested positive for coronavirus and was admitted to hospital. His main opponent, the Democrat’s Joe Biden, tested negative after the pair appeared in a live televised debate just days before. The election is under a month away and has been marred by controversies on both sides of the political spectrum.

Not least the manner in which US citizens will go to the polls, with widespread mail ballots being advised because of the pandemic, with Mr Trump’s team claiming the voting method will instantly invalidate the election.

The ballot is not only one of the most significant votes for US citizens in recent history, but also for the rest of the world.

In Britain, Prime Minister Boris Johnson’s Government is looking to secure foreign trade deals as the Brexit transition period with the EU comes to a close.

Currently, the UK and EU have not yet agreed on a comprehensive agreement, although reports suggest that both Westminster and Brussels are quietly confident that a deal will be struck.

Whoever wins the US election, then, will have serious implications in carving a future US-UK trade deal.

This is especially true after Mr Biden recently warned the UK that there would be no US trade deal should Northern Ireland become a “casualty of Brexit” in reference to the Good Friday Agreement.

Mark Littlewood, the director general of the Institute of Economic Affairs (IEA), suggested to Express.co.uk that should Mr Trump win reelection, Britons across the country could see more money in their pockets.

He explained: “I suspect that a trade deal is more likely if Trump if reelected, and a little less likely if Joe Biden prevails – we’re probably in a better position with the incumbent than with the challenger and that in part is because we would have to go back to the drawing board in the event of there being a new administration.

JUST IN: Boris told to WALK AWAY as Brexit talks with EU ‘holding UK back’

“A trade deal or at least removing trade barriers with the US should be a high priority.

“The wider benefits will be dispersed to the British population as a whole.

“You will barely notice each benefit but in aggregate they will make you a lot better off – they could be huge.

“The US is our single biggest trading partner as a country, it’s bigger than Germany, although it’s not bigger than the EU as a whole, but if you were to look at it as individual countries the US is the biggest as a whole.

“We do a lot of successful business with the US putting it at number one without there even being a trade deal in place – we are currently trading with them on a no trade deal basis.

“If we can start finding ways in which it’s easier, for example, our financial services sector to operate there, and their financial services sector to operate here, for there to be a better flow of agricultural ports, for the pharmaceutical industry to have mutually recognised standards, then the benefits of the trade would be very substantial indeed.

“They’re likely to be dispersed, every family in Britain might be better off by £50 or £100 rather than it being particular industries that will suddenly see a cheque in the post, but that’s a real benefit well worth having.”

Mr Trump has previously said he looks forward to a “massive” trade deal with the UK.

Steve Mnuchin: The US Treasury Secretary previously claimed a US-UK deal could be reached this year (Image: GETTY)

NHS: Trump has previously said that ‘everything would be on the table’ in a UK-US trade deal (Image: GETTY)

US Treasury Secretary Steven Mnuchin said earlier this year that he was optimistic that a bilateral deal with Britain could be reached as soon as this year.

Since this comment, many have poked holes in any possible trade deal, however.

For example, one would, as Mr Trump has previously said, place the “NHS on the table”.

He said in an interview last year: “When you’re dealing in trade, everything is on the table.”

Brexit timeline: The transition period comes to a close at the end of the year (Image: Express Newspapers)

Many have noted that with the coronavirus pandemic and subsequent reliance on state healthcare, it is unlikely that the NHS would go without putting up a fight, with the majority of public opinion strongly in favour of keeping the NHS public, not private.

Similarly, a report from the Department for International Trade (DIT) earlier this year suggested that the British economy would at most be 0.16 percent larger by the middle of the next decade under a comprehensive trade deal with the US.

Despite the big numbers involved – around £3.4bn after 15 years – economists quickly warned that the benefits would be far outstripped by the losses from leaving the EU.

Rishi Sunak: The Chancellor would play a pivotal role in any trade deal with the US (Image: GETTY)

Dr Peter Holmes, an academic at the UK Trade Policy Observatory at Sussex University, told The Guardian: “The numbers are very small. It just goes to show how tiny the gains are from a free trade agreement with the US compared to losing our present arrangements with the EU.”

However, as Mr Littlewood noted, in reality, little would be lost should a trade deal with the US fail to materialise following the transition period, as the two already have close to tariff-free trade for their major exports.