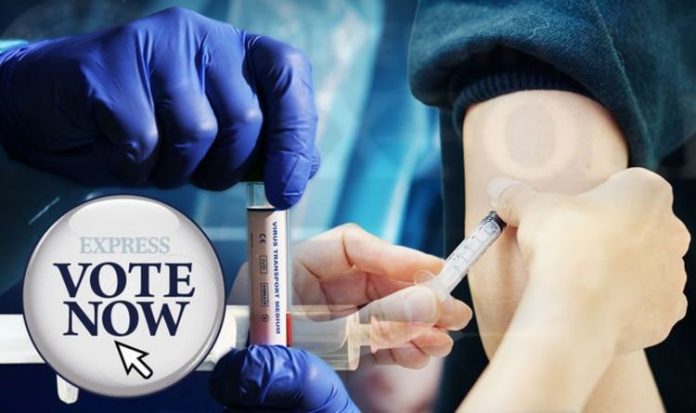 Days after England entered its second national lockdown since the outbreak of the virus, hope was refuelled after pharmaceutical giant Pfizer, alongside German partner BioNTech, announced their experimental vaccine is 90 percent effective.

With the hope of an end to the pandemic in sight, Express.co.uk is asking how the breakthrough has made you feel.

While some have already expressed scepticism for a vaccine, with the new vaccine, would you be inclined to have it?

If proved to be successful, the vaccine could be rolled out to the elderly and NHS staff before Christmas.

A vaccine use for the wider population will not be ready for use until the start of next year.

But even with a vaccine, when do you think things will be able to go back to normal?

With news of the vaccine, Pfizer chairman and chief executive Dr Albert Bourla said: “The first set of results from our Phase 3 COVID-19 vaccine trial provides the initial evidence of our vaccine’s ability to prevent COVID-19.

“With today’s news, we are a significant step closer to providing people around the world with a much-needed breakthrough to help bring an end to this global health crisis.”

Prime Minister Boris Johnson said the country will be ready to use the vaccine as soon as it is approved.

READ MORE: Even with vaccine breakthrough UK will be ‘tackling’ COVID for 2 years

The UK has been one of the worst hit countries in the world following the outbreak of the virus.

With more than 49,000 deaths, the UK has the highest death toll across Europe.

In order to curb the rising number of cases, Mr Johnson announced a second lockdown for England.

Under the new restrictions, pubs and restaurants have been forced to close but takeaways remain open.

All non-essential shops, leisure and entertainment venues also shut their doors for the second time this year.

And no households mixing is permitted indoors or in private gardens, unless in a support bubble.

Those who are able to continue to work from home should do so while schools, colleges and universities remain open.

As businesses across the country have been forced to close again, Chancellor Rishi Sunak also announced the furlough scheme will be extended until March.