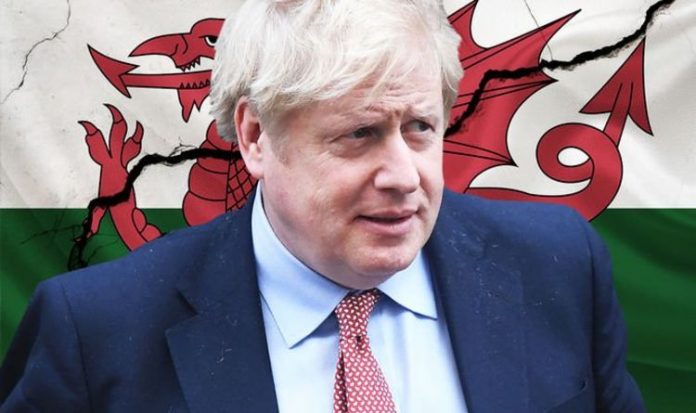 And chairman of YesCymru Sion Jobbins claims the Internal Market Bill is a “Westminster power grab” which will shine a light on the issue. With polls suggesting majority support for Scottish independence, Welsh nationalism has garnered significantly less attention in recent years – but YesCymru aims to bring the question to the forefront, seeking to go beyond what organisers see as the overly cautious tactics employed by Plaid Cymru. Mr Jobbins told Express.co.uk YesCymru was a “non-party political, cross-party volunteer movement for an independent Wales”.

He wants Wales to have its own seat at the United Nations, and to stop sending MPs to Westminster.

A YouGov poll of 1,021 Welsh adults carried out in late May suggested 25 percent backed the idea of full independence, up four percent on a similar survey in January.

Mr Jobbings told Express.co.uk: “At the moment we are building a movement for independence and making the case.

“The arguments for independence have never really been made in Wales, not even by Plaid Cymru, until very recently.

“We’ve started from a very low base – typically around 10 percent – to two recent polls putting it 32 percent (of those who said they’d vote) would vote for independence (25 percent of whole sample but not everyone ever votes in any election).

Boris Johnson has been told Wales could soon stake its claim for independence (Image: GETTY)

“A poll published today shows that 51 percent of people who voted Labour in Wales in 2019 election would vote for independence, so the campaign is winning ground and winning new support.

“Our main priority at the moment is building the campaign in Wales, not seeing permission from Westminster.

“We know also that once the Scottish referendum is held – and we believe will see a vote for Scotland becoming a nation state – the situation in Wales will change dramatically as the UK will cease to exist.”

“We set up YesCymru because we believed it was time to make the case clearly and confidently for independence otherwise people never hear the argument.”

READ MORE: ‘This is GREAT Britain!’ UK has nothing to fear outside EU

However, he added: “During the last few years, and especially since Brexit and Adam Price becoming leader of Plaid, the party has taken a more proactive path in making the case for Wales to be an independent country like other small nations like Ireland, Denmark, New Zealand or Singapore.”

Questioned as to whether Wales, with its population of just under 3.25 million, could manage on its own, Mr Jobbins said: “Wales is well equipped to be independent.

“Our GDP per capita is higher than Spain or Portugal, our tax revenue per head is high than New Zealand’s, we have 15 percent of the whole of Europe’s tidal power, we already export twice as much electricity as we use and, are in fact, the world’s 6th biggest electricity exporter, we also have excellent brands in food and meats, a strong tourism sector and six universities where most of the students come in from outside Wales.”

He also pointed to the fact that Wales had its own national football and rugby teams, adding: “Wales is better and more ready to be independent than the vast majority of countries who’ve ever become independent since the War.”

Wales, unlike Scotland, backed Brexit four years ago – but Mr Jobbins denied that would present a problem.

Advocates argue Wales is well-equipped to break away from the Union (Image: GETTY)

He explained: “We believe by the time the issue of independence becomes something to vote on in Wales, Brexit will be a side issue and won’t play a big part.

“The question of rejoining the EU or seeking an economic relationship like that with EFTA would be options do take after independence, though – we’d follow closely the situation in Scotland.

“Many of the pro Brexit arguments are true for Wales – unelected politicians passing laws on Welsh life (House of Lords), money Wales pays in taxes is then spent in Wales under the guise of being some kind of gift, tax payers in Wales subsidising London’s infrastructure, the colossal waste of HS2 and also Trident.

Wales has a population of just under 3.25 million (Image: GETTY)

For YesCymru the IMB has just proven what we’ve said all along – Westminster is a con, which wants to make Wales a vassal state

“Brexiteers also continued to celebrate the success of small independent countries like Singapore, Switzerland, Norway, Iceland or even the bravery of Ireland declaring independence.

“So, we’re already seeing people translating those sentiments to Wales being a small independent country.”

As for recent developments in Westminster, Mr Jobbins believes the controversial legislation, published this week, proves his point.

While Boris Johnson has said the move will devolve more power to the regions, critics – including Mr Jobbins – claim in practice the legislation will run roughshod over the rights of the Welsh, Scottish and Northern Irish governments.

Sir John Curtice believes support for independence in Wales is still well below what it is in Scotland (Image: GETTY)

He said: “The Internal Market Bill is a Westminster power grab over the Welsh and Scottish parliaments.

“For YesCymru the IMB has just proven what we’ve said all along – Westminster is a con, which wants to make Wales a vassal state and bring the Celts – Wales, Scotland and Northern Ireland – to heel.