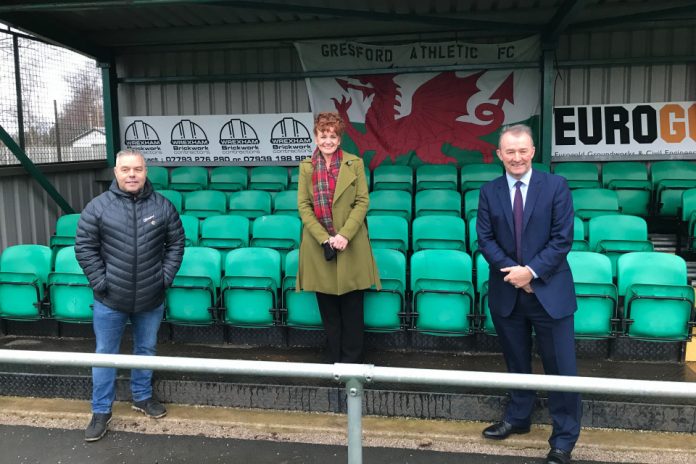 Welsh Secretary Simon Hart has visited a grassroots football club in north east Wales to hear how it has been affected by the Covid-19 pandemic and about how it will receive a share of a financial support package which the UK Government helped arrange.

Gresford Athletic FC is one of 44 Cymru League clubs who will receive a share of a £750,000 package created by the FAW and the National Lottery and facilitated by the UK Government. It will see clubs in the three Cymru League divisions receive support while matches are played behind closed doors because of Covid-19 restrictions.

Mr Hart visited Gresford Athletic on Monday (30 November) alongside local Wrexham MP Sarah Atherton where he heard from the club’s Chairman Julian Davies, members of the committee and players about the effect of the pandemic on the club and its supporters.

Clubs like Gresford Athletic play a huge role in their local communities and, like many others, they have been struggling during the pandemic without supporters watching matches, money coming in over the bar or the ability to raise funds.

That’s why I was delighted that the UK Government could help bring the National Lottery and the football authorities together to deliver a financial support package and I hope the money will provide some help to fantastic grassroots clubs like Gresford.

The Covid situation has had a real financial impact on clubs like ours with no spectators coming through the gates, sponsorship down and community fundraising on hold.

It’s been extremely difficult for all clubs, so the help from the FAW and the Lottery is appreciated while we wait to get back to playing football, which we hope will happen very soon.

I understand the importance of Gresford Athletic to the community, as well as the importance of football to Wrexham. Providing some certainty to football clubs such as Gresford during these times is crucial and we must ensure their survival post-lockdown.

I was thrilled that the UK Government was able to facilitate support for 44 clubs, including Gresford, from the FAW and the National Lottery. It is the boost they needed and deserved.

The £750,000 funding partnership follows a similar National Lottery initiative between the FA and National League in England, facilitated by the UK Government. Work continues on partnerships with the Scottish and Northern Ireland FAs.