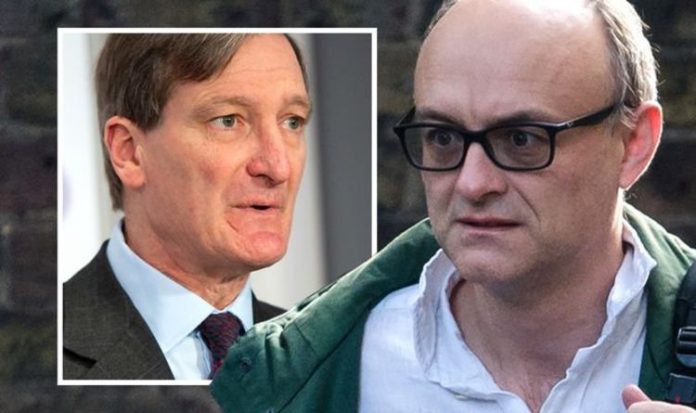 After 13 months working at the most famous address in British politics, Prime Minister Boris Johnson’s chief adviser Dominic Cummings left Downing Street. The Brexit guru moved his office into 70 Whitehall, a short walk from his old base in Number 10. The moment passed without political hysteria – but the motivations behind it go to the heart of what Mr Johnson’s Government wants to achieve.

Dr Jon Davis, from King’s College London, told BBC: “What you need is a Number 10 where you push a button or pull a lever and things actually happen.

“There’s nothing more frustrating for a Prime Minister than the idea that you have the power but nothing actually happens.”

It is no secret the chief adviser wants to reform the machinery of Government – as his revolutionary plans have been a key feature of his personal blog throughout the last decade.

However, not everyone seems pleased with him.

Last year, former Conservative MP and Attorney General Dominic Grieve accused Mr Cummings of being a “Maoist right-winger”, who was “taking a sledgehammer” to the British constitution.

Mr Grieve, who led several attempts to block a no deal Brexit, hit out at Mr Cummings, who he claimed was “spreading disinformation” from Downing Street to divide anti-Brexit MPs.

He rubbished claims that the law which stopped no deal on October 31 – the Benn Act – had loopholes, and told a fringe event at the Conservative Party conference in Manchester that Mr Cummings wanted to wreck the UK’s political system.

He and other anti-Brexit MPs had just been accused of “foreign collusion” in a report by the Mail on Sunday.

The report claimed Mr Grieve, Tory Sir Oliver Letwin and Labour’s Hilary Benn were in receipt of foreign funds and sought the help of EU advisors to write the legislation.

Mr Grieve said the report was completely untrue and that Mr Cummings could have been behind a “serious piece of defamation”.

He said: “This is a classic example of the sort of corruption of our political system that is now coming in at the hands of Mr Cummings.

“I do worry that the closer we have got to October 31 the more the present Prime Minister has departed from every conceivable Conservative principle in order to ratchet up the rhetoric, and he is now employing as his chief of staff a sort of Maoist right-winger, with a belief in destruction of politics which is so out of keeping with our party’s tradition as to be frankly astonishing.

DON’T MISS:
Economic policies Keir Starmer may use to ‘win back the Red Wall [EXCLUSIVE]
Norway highlights EU’s ‘incompetence’ with prompt offensive action [INSIGHT]
How Labour went from being MOST eurosceptic party to pro-EU [ANALYSIS]

“What is this culture war on our constitutional traditions.”

He went on to claim the prorogation of Parliament was “an own goal of spectacular proportions” and Mr Cummings was using Brexit to attempt the “destruction of politics”.

He added: “If we continue this sort of behaviour, it is taking a sledgehammer to a rather delicately constructed edifice.

“Now, it is quite robust but there are bits flying off it, the china is breaking and I don’t think Mr Cummings will be around for the next few years to get the superglue out and put it back together again.”

Mr Grieve lost his seat in Buckinghamshire after running as an independent at the December general election.

The Tories held Beaconsfield after he was beaten by new Conservative candidate Joy Morrissey.