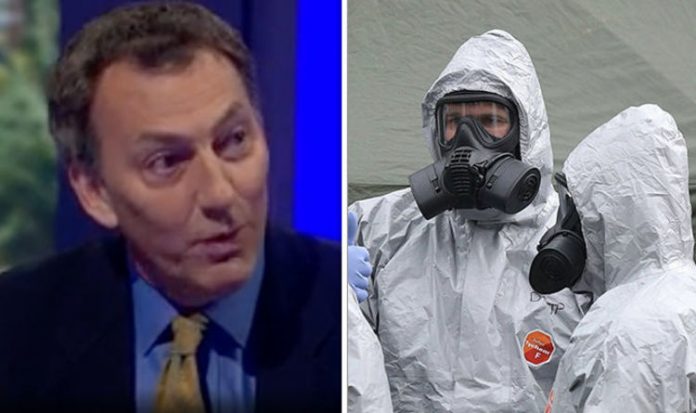 More than one hundred anti-terror police officers are investigating after a middle aged couple came into contact with the deadly nerve agent over the weekend.

British nationals Charlie Rowley, 45, and Dawn Sturgess, 44, are fighting for their lives in Salisbury District Hospital after being found unconscious in Amesbury on Saturday.

Newsnight Diplomatic Editor, Mark Urban, has been following the story since the Sergei and Yulia Skripal were found left for dead on a bench in March, and he said these two new “poor” victims may have been poisoned by the same “device”.

Speaking on the programme yesterday evening, Mr Urban said: “The investigation into the Skripal incident, we know about a viscous liquid made up of Novichok agent A234 that was squeezed on to a door handle.

“It’s long been the assumption among the people investigating that either this was prepared somewhere nearby, or once it had been done, the device that was used must have been discarded somewhere.

“Possible both of these things are true: that there was a preparation site, and a site where it was discarded.”

Despite the theory, in the four months since the first poisoning, investigators have not found what equipment was used for the Novichok that hospitalised the Skripals.

“They have been looking in vain for those places”.

Four months after the Skripals were struck by Novichok, Mr Urban thinks it is possible the new victims could have stumbled on the criminal equipment.

He said: “The poor people from Amesbury may have discovered one or other of those places.”

With the Skirpals: “It is quite possible that the person having applied it to the door on foot went down through Queen Elizabeth Gardens down towards the Water Meadows south of Salisbury and may perhaps, we’re speculating here, have discarded something there.”

Mr Rowley and Ms Sturgess are known to have been at the Queen Elizabeth Gardens in the last week.

The area is one of several that has been cordoned off by police as they conduct their investigations.

A chemical weapons expert believes the couple were “incredibly unlucky”.

Hamish de Bretton – Gordon told ITV: “There might will be the odd molecule of Novichok left around from the Salisbury attack, but the areas where it’s previously been discovered have been decontaminated or are being decontaminated, so the fact that a couple of molecules have infected these two people is bizarre.”

The Government will assemble an emergency COBRA meeting this morning to discuss the issue.