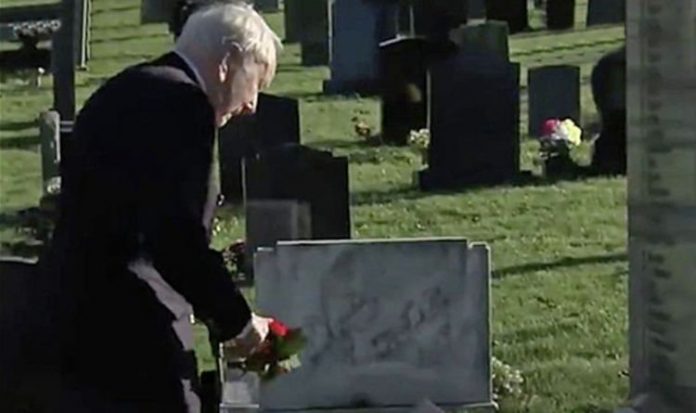 Douglas Newham, 98, had been unable to find a memorial to RAF flight navigator Bill Gorley, who died in Asia in 1946.

After Mr Newham wrote for help, BBC Radio Cumbria tracked down the memorial to the 27-year-old flight lieutenant in Flimby, Cumbria.

The pair had flown missions together as navigators in bomber command. After the war they flew missions to air-drop food supplies to villagers in Burma.

Flt Lt Gorley’s plane crashed, killing him and seven crew. Asked how he felt laying the wreath last week after his 74-year hunt for the memorial, Mr Newham said: “Humble, privileged and, if I may say so, b****y lucky.”

Flt Lt Gorley’s nephew sent a recorded message to Mr Newham, thanking him for the tribute.

Meanwhile, a blind veteran unable to march at the Cenotaph this weekend because of the pandemic will join others online.

Tony Harbour, 85, from Brighton, and more than 100 other blind veterans have the chance to get together virtually in “listen and join in” parties, assisted by Blind Veterans UK.

He said: “My father fought in the First World War and I wear his medals with pride on Remembrance Sunday.

“It’s sad not to go to London but I’ll be at home watching on TV.”

The largest satellite dish at a GCHQ listening post was lit up last night to mark Remembrance Sunday. The illuminated dish in Bude, Cornwall, was visible for miles along the coast.