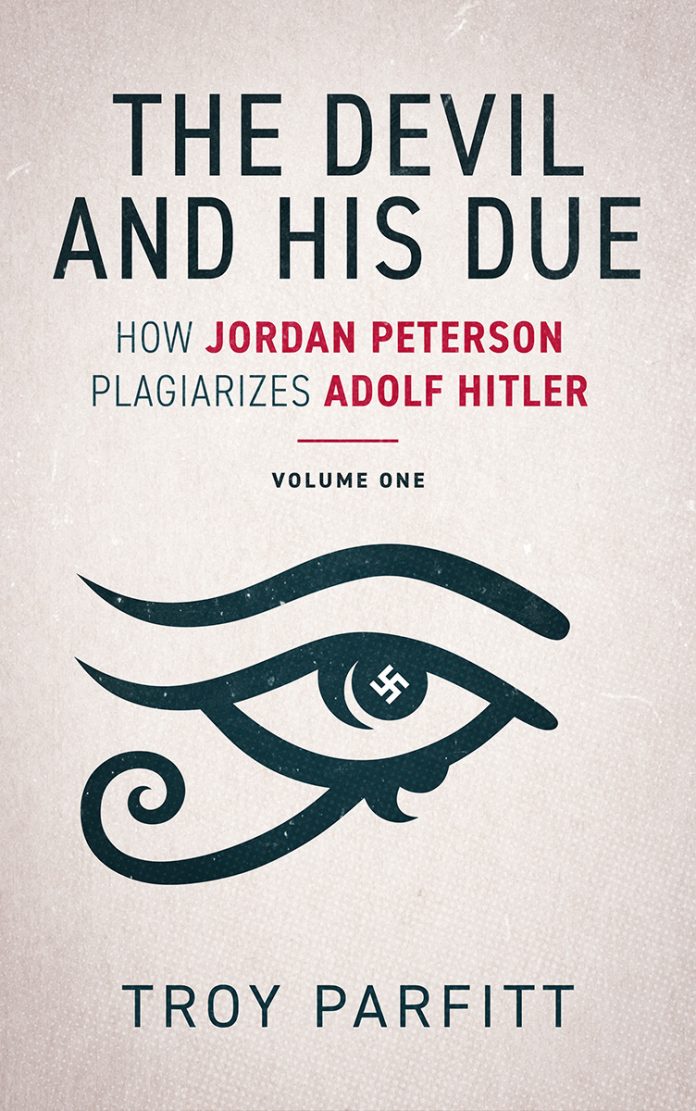 The Devil and His Due: How Jordan Peterson Plagiarizes Adolf Hitler by Troy Parfitt offers into evidence some 3,100 instances of Dr. Jordan B. Peterson allegedly copying the written and spoken text of Adolf Hitler. Volume One of a two-volume series will be released on November 1, 2020 in e-book and paperback edition. Its length is 460 pages.

Jordan Peterson is a professor of psychology at the University of Toronto, best-selling author of 12 Rules for Life, and pop-psych guru whose YouTube channel boasts 2.87 million subscribers. Often described as controversial, Peterson shot to fame after challenging Canada’s Bill C-16, which made it illegal to deny employment to or discriminate against people based on their gender identity or expression.

Troy Parfitt is an educator with qualifications from four universities: Edinburgh, Glasgow, New Brunswick, and Cambridge. He is also the author of three previous works of non-fiction, including Why China Will Never Rule the World and War Torn: Adventures in the Brave New Canada, as well as one work of fiction: The Bigot, or How I Learned to Love Donald Trump (a satirical novel).

In The Devil and His Due, Parfitt argues that “the Jordan Peterson Phenomenon” is a mainstream cult whose leader identifies as “the saviour,” feigns Christian beliefs, glorifies Satan, discusses “the Jewish question,” encourages converts to slaughter goats in backyard sacrifices that ought to be “sufficiently bloody,” suggests that suicide can be an effective method for achieving revenge, touts banned substances as “miracle cures,” and teaches that the alt-right project is “incomplete.” Parfitt also asserts that Peterson employs Hitlerite speech to communicate in a crypto-fascist code, but that his supporters seem generally unaware of this.

Parfitt wondered if Peterson might have been borrowing from Hitler after noticing that he frequently complimented the dictator. “He says he’s rescuing people from the clutches of the far-right, but tells his followers that Hitler was a genius who was good at nearly everything, so I read Mein Kampf to see if he had found it inspiring. What I discovered was blatant academic theft.” Parfitt claims that Peterson’s 12 Rules for Life and Maps of Meaning are riddled with language and ideas from Hitler’s Mein Kampf, Second Book, Table Talk, and speeches. Peterson’s next book, Beyond Order: 12 More Rules for Life is due out in November.

Parfitt is not the first to suggest that Peterson is a crypto-fascist or neo-Nazi. Historian Mikael Nilsson has accused Peterson of making a “barrage of revisionist falsehoods Hitler and Nazism,” noting his “strangely generous framing of the Nazi leader” and his “reluctance to use the word ‘Holocaust.’ ” The CBC’s Wendy Mesley and British GQ’s Helen Lewis have questioned Peterson why he posed with a Pepe the Frog flag (identified by the Anti-Defamation League as a hate symbol); and Peterson filed a lawsuit against Sir Wilfred Laurier University after a staffer compared him to Hitler. Peterson has said, “I’m no fan of the radical right. I’ve been lecturing the dangers of Nazi totalitarianism… for almost three decades.”