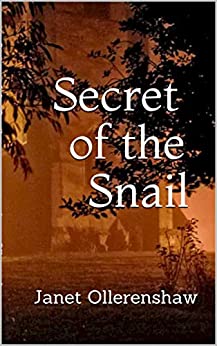 “Secret of the Snail” by Janet Ollerenshaw is published

“Secret of the Snail” by Janet Ollerenshaw is published

Summonsed to the sleepy village of Hingemont, Imogen slowly unravels the secrets that led to the untimely death of her grandmother. Relationships are strained and mysteries abound as suspicion falls on some innocent and incredulous locals. A missing key, an illicit affair, an angry child and an irascible old lady pepper these pages with possibilities as the villagers close ranks to support and protect those that ‘belong’. Set in present-day England’s rural East Midlands, the story winds as slowly as the country lanes dictate and it is only when the Snail finally reveals its secret that the mystery is solved.

Janet Ollerenshaw is a retired English & Music teacher and mother of seven children. She has lived in Hertfordshire for most of her life and has been involved with Scouting, animals and arts and crafts alongside her teaching career.  She writes for pleasure and enjoys word-craft, so her writing can be prosaic at times as she feels the experience of reading should be more than just a good story, rather like a fine wine, which touches senses other than simply taste and satisfaction and which lasts the test of time.

Janet has a Masters in Educational Research from Cambridge and studied with the Open University for her first Degree in Humanities with Music and English Language. She does seasonal work as an exam marker for Edexcel and for the Cambridge International Exam board.  Janet previously published the “Turning” series of novels entitled “Inside Out”, “Upside Down” and “Back to Front”.

Excerpt from SECRET OF THE SNAIL:

“For a while she pondered who had called her. It had been so unexpected that she had only briefly registered a woman’s voice, the words ‘murder’, ‘hysterics’ and ‘blood’ and was relying on her phone’s records for further details the caller. There would be time to investigate that once the immediate issues were dealt with.

Whilst Charlie sat rocking back and forth on the headstone, she walked carefully round the churchyard, keeping him in her sight at all times. That meant that she couldn’t go to the far side of the church and so did not see the tyre tracks in the mud by the main, gated entrance to the small car park. Neither did she see the discarded purse where it lay amongst the brambles in the hedgerow but on returning to her position near Charlie’s headstone, what she did see was an extraordinary procession advancing towards her. From her left approached a figure in a motorised wheelchair and from her right, a walking stick wielding lady accompanied by a small boy. As they drew nearer and turned in through the lych-gate, all three were shouting and gesticulating wildly; the two ladies appeared to be arguing vociferously, what she had no idea, and the small boy was excitedly gabbling witches and school teachers.”

Secret of the Snail is available in paperback and can be ordered from Amazon at:

This novel is also available to download as an e-book from Amazon at: