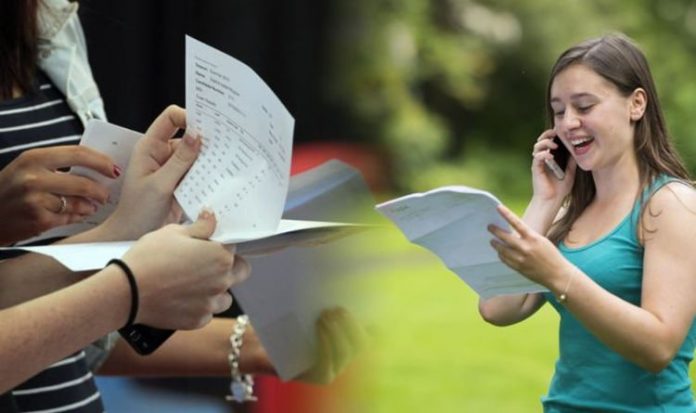 Students across the UK have faced upheaval this year as exams were cancelled due to the coronavirus pandemic and subsequent lockdown. With months of revision and practice exams under their belts, there was widespread frustration for those due to leave college this year. Now A-level results are due, with schools and colleges using different ways to assess results.

Without exams to rely on, students have been concerned about how their results will be graded.

A-levels determine which university students can attend, further education or apprenticeship schemes they can get on to or job prospects.

In the wake of coronavirus cancelling exams, 250,000 students will receive results on Thursday based on predictions set by teachers.

But those predictions will be subject to moderation by exam boards – with previous results for the school or college looked at to ensure consistency.

How are results being calculated in England?

GCSE and A-level students in England have been told of a so-called “triple lock” approach, which will essentially pick their best result.

This means students can accept their calculated grade, appeal to receive valid mock results, or sit their exams when schools return properly in the autumn.

Education Secretary Gavin Williamson announced on Tuesday evening results in mock tests – which were held before schools were forced to close amid the pandemic – will carry the same weight as the calculated results to be awarded later this month.

How are A-level results being calculated in Scotland?

Mr Williamson’s announcement followed a U-turn north of the border, when Scotland’s Education Secretary John Swinney revealed tens of thousands of students would have their exam results upgraded following a public outcry.

Students complained after the moderation systems resulted in the downgrading of more than 124,000 test results.

Instead, those lowered results would revert to the grades estimated by pupils’ teachers.

First Minister Nicola Sturgeon was also forced to apologise for the moderation fiasco, after it emerged students from deprived backgrounds saw their results disproportionately downgraded.

The Scottish education system is different to that in England, Wales and Northern Ireland, with Highers being the equivalent of A-levels.

The Welsh Government has said there will be no problems for their A-level results.

Housing and local government minister Julie James said during a briefing on Tuesday Wales uses different modelling to Scotland and nearly half of pupils’ final mark was based on AS-levels completed last year.

There had been concerns from students such a model would mean pupils at schools which had historically not performed as well would be unfairly penalised.

But Ms James said: “We are obviously very keen that our learners are given the accolade they need for the hard work that they’ve done but also that they get the grades that they deserve, and that those grades are robust and will take them forward into their lives with confidence.

“We’re not expecting what happened in Scotland to happen here.”

Results will be based on teachers’ predictions and statistical modelling.

Teachers were asked to predict the grades they thought pupils would have achieved had exams gone ahead, based on coursework, the result of mock exams, and homework.

Schools were also requested to rank pupils in each subject.

But Northern Ireland’s exams body, the Council for the Curriculum, Examinations and Assessment, said students will have a broader scope to appeal their A-level and GCSE grades.