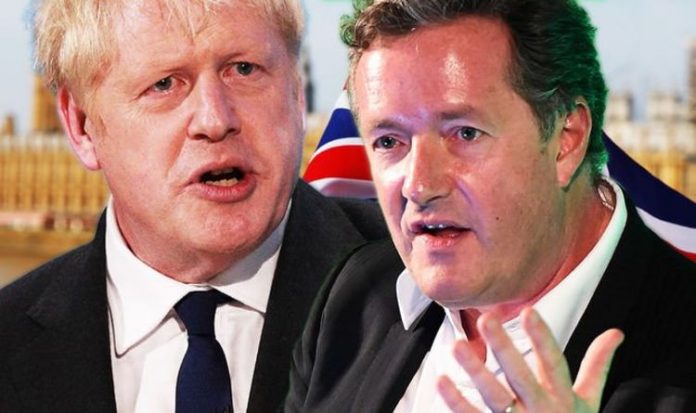 Taking to Twitter, the Good Morning Britain presenter retweeted the Prime Minister’s post from January 2 of a picture of himself with his thumbs up. The caption said: “This is going to be a fantastic year for Britain.”

Retweeting the post, Mr Morgan wrote: “Worst prediction in the history of mankind?”

The former newspaper editor sparked a mixed reaction from his followers over his tweet.

One commented: “Worst PM in modern history too, I thought May would take some beating but Boris has knocked her out of the park through his sheer incompetence.”

Another wrote: “It was never going to be a fantastic year for Britain, not with Johnson at the helm. Pandemic or no pandemic.”

But a third stuck up for Mr Johnson and said: “Yes piers, that might have something to do with a global pandemic.

“Or would you have preferred Boris to say ‘this is going to be an absolutely terrible year for Britain’, at the start of the year?”

Another commented: “He did not have a crystal ball and without COVID it probably would have been.”

A fifth asked: “If you are so clever how come you did not foretell what was going to happen?”

READ MORE: Recession 2020: What happens during a recession?

In another tweet today, the GMB host hit out at Mr Johnson over the UK’s coronavirus death toll and recession.

He wrote: “The UK has suffered the worst #coronavirus death toll in Europe AND now the worst recession in Europe.

“This would suggest we have the most incompetent Govt in Europe.”

Mr Morgan’s tweet comes as the UK’s coronavirus death toll stands at 46,706, according to the latest figures from Public Health England.

Meanwhile, Britain officially entered into the largest recession on record after figures by the Office for National Statistics (ONS) showed the economy plunged by 20.4 percent between April and June – the biggest hit from the pandemic in western Europe.

The drop follows a 2.2 percent fall in the previous three months.

A recession is defined as two successive quarters of decline in gross domestic product (GDP).

The UK’s plunge of 20.4 percent in the second quarter even beat Spain’s huge 18.5 percent drop.