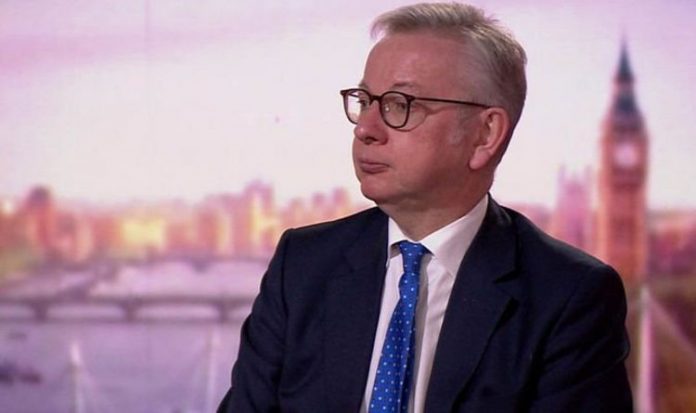 Brexit neogtiations between the UK and the EU have stalled once again as the sides have failed to come to agreement over fishing. The EU has said it is prepared to “intensify” talks but added it will not agree a deal “at any price”. Brussels’ chief negotiator Michel Barnier was due in London for talks with David Frost today but the UK said any such meeting was pointless without a fundamental change in talks.

Instead, Mr Barnier will join “remotely, as planned”, his team said.

However, firm Brexiteer Michael Gove told the Andrew Marr Show on Sunday that the EU had  “effectively ended the current round of talks” when its 27 leaders met in Brussels on Thursday to take stock of progress and said more was required from the UK.

He said: “It was the case we were making progress but then the EU retreated from that. We have drawn the conclusion that unless their approach changes, they are not interested and they have in effect drawn stumps.”

But what does this mean exactly?

But many officials on both sides of the English Channel believe this tough talk from Westminster will still result in both sides making compromises.

Britain’s Brexit transition period ends on January 1 and Prime Minister Boris Johnson is expected to warn business leaders this week that “time is running out”.

Mr Gove and Mr Johnson will make it clear that businesses must prepare for January 1 regardless of whether a trade deal is agreed.

A major advertising campaign is being launched to publicise customs rules, amid growing concern over borders as the UK fully departs from the EU.

Along with the “time is running out campaign”, HM Revenue & Customs will write to some 200,000 traders who do business with the EU, to help set out new customs and tax rules.

Adam Marshall, director-general of the British Chambers of Commerce, said: “Facing the triple threat of a resurgent coronavirus, tightening restrictions and a disorderly end to the transition period, it is little wonder businesses are struggling to prepare.”