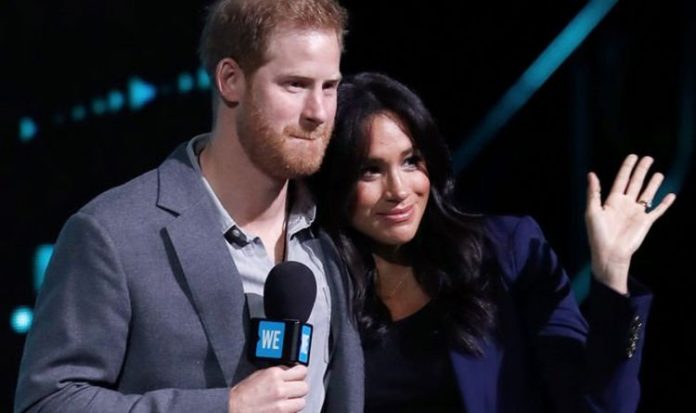 Meghan Markle, 39, and Prince Harry, 36, will co-host a special edition of talks with experts for Time100 on Tuesday. The topic of the virtual conversation is ‘Engineering a Better World’ and will focus on how technologies, including social media can be used to effect positive change. According to one royal commentator, this agenda is key to Meghan and Harry’s new non-profit organisation Archewell which the couple have put off launching amid the pandemic.

A Time Magazine spokesman said of the upcoming talk: “Prince Harry and Meghan, The Duke and Duchess of Sussex, will host a specially curated edition of TIME100 Talks, TIME’s series of virtual conversations that convenes extraordinary leaders from every field to spotlight solutions and encourage action.

“Themed around the topic of ‘Engineering a Better World,’ the special episode of TIME100 Talks reflects The Duke and Duchess’ focus on building online communities that are trustworthy, safer, and more equitable—and what that means for supporting and accelerating progress on critical issues like gender equity, racial justice, and climate change.”

Commenting on the upcoming engagement, royal commentator Richard Fitzwilliams claimed the couple’s high-profile collaboration with Time will bolster their status as campaigners for social media change.

Mr Fitzwilliams told Express.co.uk: “There are many believe that Meghan has political ambitions and this certainly seems likely.”

The commentator added: “Now they are curating virtual Interviews for Time 100 Talks called ‘Engineering a Better World’ choosing those whom they believe are significant figures in different fields.

“This is also an opportunity for them to promote racial justice, gender equality and climate change, issues which are also likely to be promoted by their non-profit foundation Archewell when the pandemic allows them to launch it.

“The dangers of social media and internet addiction, a very pertinent subject, will be its central theme.”

He added: “The photograph they have released when they announced this project is charming.”

The expert added: “Time is probably the most prestigious magazine of its type with a worldwide reputation.

“In an ABC special they unveiled the Time Top 100 list recently, in which, highly surprisingly, they did not appear.

“It was then that they encouraged people to vote in the forthcoming election.

“Harry skated on thin ice given his position as sixth in line to the throne by attacking ‘hate speech, misinformation and online negativity’.”

“This was subsequently mocked by Donald Trump, against whom it was clearly aimed.”

Meghan and Harry have been based in the USA since stepping away from their royal roles in March.

They now live in the upmarket neighbourhood of Montecito, Santa Barbara with their son Archie Harrison.

Despite quitting as working royals Meghan and Harry have kept their HRH titles and are remain the Duke and Duchess of Sussex.

Whether or not they will hold onto these titles going forward will be decided by the Queen in March.