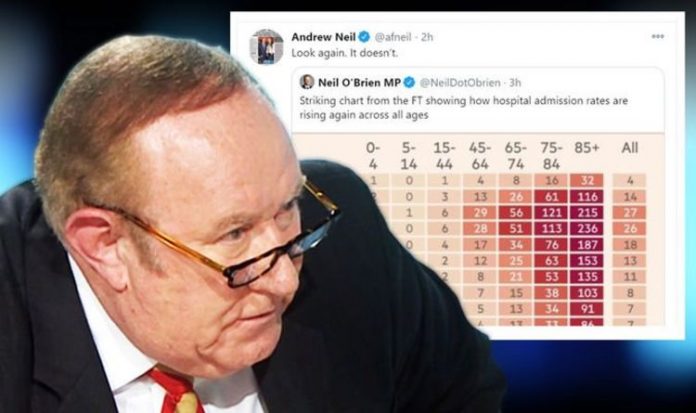 However, in a quick retort to the MP, Neil quickly referenced how hospital admissions across the country were not rising across all ages.

Coronavirus: Andrew Neil hit back at the tweet (Image: BBC/Twitter)

Although for the younger age groups, the virus has not had such a large impact, there are fears the UK may need a second lockdown in order to stop the spread of the virus.

Other countries such as France and Ireland have now introduced strict measures in order to try and curb the virus and the rising number of infections.

In the latest week, the Office for National Statistics estimated there were 51,900 new infections per day in England in figures released today.

Coronavirus: There are fears a lockdown could be enforced (Image: GETTY)

They also estimated 1 in 100 people within England had coronavirus between October 17 to 23.

Amid these concerns, experts have claimed a circuit-breaker lockdown should be enforced before it is too late.

With many areas expected to reach Tier 3 restrictions next month, some officials have even claimed Boris Johnson must enforce a lockdown before and after Christmas.

While No 10 has refused to bring in a second lockdown, Labour has advocated a time-limited circuit-breaker in line with advice from some of the scientific experts.

Speaking on Sky News, Foreign Secretary, Dominic Raab said: “If you look at those who’ve advocated a national lockdown they have never been able to say how you get out of it.

“Overwhelmingly our sense is you’re far better leaning into and being absolutely committed to localised measures.

“I think the country does understand the predicament we’re in and the county does not want to go into a national lockdown.”

However, due to a rise in cases, West Yorkshire was the latest region to be declared as moving into Tier 3 as of November 2.

In contrast to Mr Raab, Home Secretary, Priti Patel refused to rule out a second lockdown.

Coronavirus: Cases have risen across the country (Image: GETTY)

She said: “Well, I think at this stage, of course, we can rule nothing out because we are a government that is focused on making sure that we stop the spread of this virus, and also we protect public health.