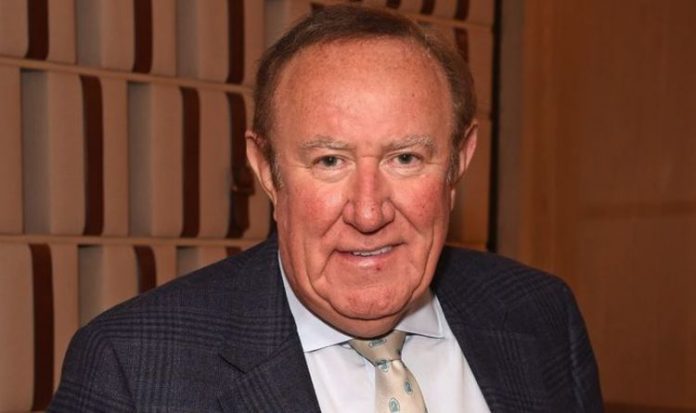 The ex-BBC presenter took to Twitter to respond to reports that former editor of the Telegraph and Spectator Charles Moore is Downing Street’s first choice for the position. Mr Neil, also thought to be a possible candidate, said he expects the BBC to be “begging” him to take it now – but added he has “no interest” in the job.

He tweeted: “BBC executives were choking on their muesli when it was reported that I was in the running to be next Chairman of the BBC.

“I have no interest in the job.

“But now the Daily Mail is reporting Charles Moore is favourite for the post, I expect BBC to be begging me to take it.”

Writing for the Telegraph in February, he said: “It is essential to understand that technological and generational change has already destroyed the BBC’s century-old ‘wider still and wider’ doctrine.

Andrew Neil took to Twitter to speak out about the chairman role at the BBC (Image: GETTY)

“It is simply not possible for it to dominate all fields any longer. The BBC must start to decolonise.

“It needs government help to do this in a dignified manner – more like British imperial decline than like the fall of the Soviet Union.”

Mr Moore added that the broadcaster has a “woke” bias.

He said: “This bias is not chiefly party political (though it is certainly anti-Tory).

Charles Moore is reportedly Downing Street’s first choice to be the next chairman of the BBC (Image: GETTY)

“It is politico/cultural – woke, pro-Remain, credulously green, anti-market, obsessed with issues connected with ‘diversity’, yet itself not truly diverse at all.

“This means that the BBC excludes a vast range of people, views and activities which are important in the life of this country.

“If you had watched only the BBC in 2016, it would have come as an almost total shock to you when 17.4 million people voted Leave.

“The bias led to blindness. This means that it is not a good public service.

BBC executives were choking on their muesli when it was reported that I was in the running to be next Chairman of the BBC. I have no interest in the job. But now the Daily Mail is reporting Charles Moore is favourite for the post, I expect BBC to be begging me to take it.

“I have studied the way this bias operates for a long time, and I am convinced that it will never reduce until the BBC’s monopoly disappears.”

Mr Moore also blasted the corporation over the licence fee, describing it as the “greatest single wrong on which the BBC rests”.

Sir David Clementi’s three-year term as chairman of the BBC ends in February.

A Government source told the Mail on Sunday: “Charles would shake things up, which is exactly what the BBC needs.”

The BBC has been at the centre of a series of controversies in recent months (Image: GETTY)

It comes as the broadcaster has been at the centre of a series of controversies in recent months.

The corporation axed the universal free TV licence for pensioners in August, prompting a major backlash.

Under the changes, over-75s must now receive pension credit to get a free TV licence.

And the BBC was forced to make a humiliating U-turn over plans to drop the words to Rule Britannia and Land of Hope and Glory at the Last Night of the Proms.

He said the BBC is “still relevant in millions of people’s lives… but, as we look to the future, there is no room for complacency”.

The new director-general added: “If current trends continue, we will not feel indispensable enough to all our audience.

“The evidence is unequivocal – the future of a universal BBC can no longer be taken for granted.”