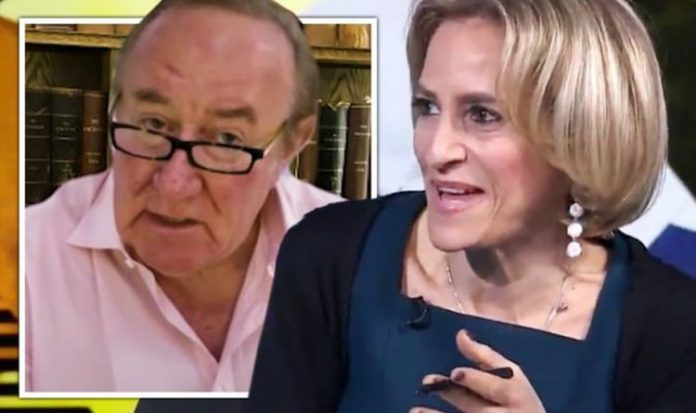 BBC Newsnight investigated the row concerning the SNP-led Scottish Government’s handling of harassment complaints made against Mr Salmond on Tuesday night. The former First Minister claims he was the victim of a high-level plot and states to have evidence that proves this, but the documents he provided have been heavily redacted by the Scottish Parliament. Commenting on this, former BBC broadcaster Andrew Neil criticised Newsnight’s handling of the spat and accused host Emily Maitlis of carrying out “inane questioning”.

Mr Neil made the comments on Twitter, where he shared BBC Newsnight’s clip of Fraser Nelson, editor of The Spectator, explaining why Mr Salmon’s testimony must be made public.

The BBC’s Tweet said: “‘This is one of the biggest political stories either side of the border for many years.’

“@FraserNelson explains why The Spectator went to the High Court to argue for publication of Alex Salmond’s evidence to parliamentary inquiry.”

But Mr Neil wasn’t impressed with the presenter’s handling of the interview, despite heaping praise on his Spectator colleague.

He wrote: “Well done Fraser, in face of surpringly [sic] inane questioning from @BBCNewsnight Emily Matlis, whose sole concern was to do down The Spectator rather than probe the enormity of the threat to democracy, Parliamentary inquiry and free speech north of the border.”

It appears Mr Neil was taking issue with the questioning regarding The Spectator’s “self-interest” in deposing the SNP’s authority in Holyrood.

Ms Maitlis asked: “What would you say to those who believe this was self-interest from a magazine with a unionist leading who would be quite happy to see the SNP implode.

“If you enemy’s enemy is your friend you would be helping Alex Salmond to take down Nicola Sturgeon and voila the union is saved.”

JUST IN: Sturgeon’s own MP turns on decision to alter Salmond evidence

The magazine claimed failing to publish Mr Salmond’s evidence risks tilting the inquiry against him and even claimed it was quashing freedom of the press.

As a result, The Spectator went to the High Court in Edinburgh and persuaded the court to clarify its ruling.

Lady Dorrian said the court had no intention of obstructing a parliamentary inquiry of stopping a free press from doing its due and therefore agreed Mr Salmond’s evidence could be published.

But this week, the Scottish Parliament Corporate Body (SPCB) withdrew and then republished a heavily revised version of Mr Salmond’s submission to the inquiry.

Some 474 words appeared to have been redacted from Mr Salmond’s evidence.

His lawyer David McKie condemned the move and said the revisions caused “significant surprise and concern”.

He also said Mr Salmond was “entitled” to have his evidence published, and added: “If any aspect of it is removed, it compromises his oral evidence.”

As a result, the former First Minister refused to appear before the Holyrood committee on Wednesday.

After the interview Mr Nelson praised Newsnight for its coverage of the Salmond story.

He wrote on Twitter: “Strange to see @maitlis accused in some places of seeking to downplay the Salmond story.

“She led Newsnight with it: a powerful summary followed by three interviews and tough, fair questioning throughout. Precisely the scrutiny this affair deserves.”