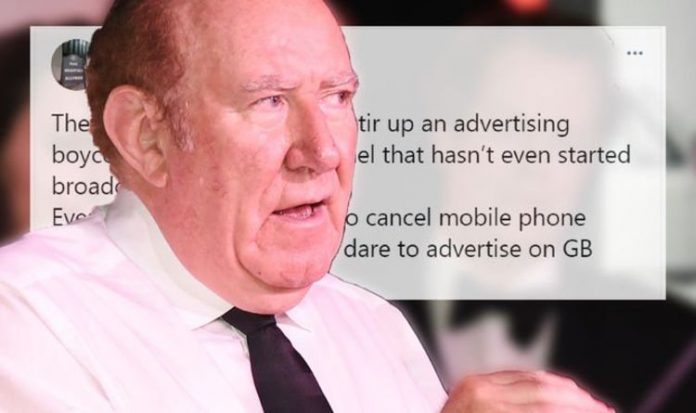 Social media users have launched an online campaign, urging sponsors to cancel their association with the channel. GB News, which is set to challenge traditional news channels like the BBC and Sky News, is set to launch later this year.

Twitter users have objected to the “Foxification” of the British media, in reference to the partisan US news network.

One person said: “Hi @santanderuk. I’ve been with you for 6.5 years. I don’t want to go, but … Please don’t advertise with GB News or any other similar Fox-style network in the UK.

“The UK press is the least trusted in Europe. We cannot let our news coverage go the way of the US.”

Another said: “Hi @LloydsBank. I have banked with you for nigh on 30yrs. If you advertise with GB news I will move my business elsewhere.”

The former BBC journalist hit back at the campaigners – before mocking their messages.

Mr Neil tweeted: “The woke warriors trying to stir up an advertising boycott of GB News, a channel that hasn’t even started broadcasting, are hilarious.

“Even funnier is their threat to cancel mobile phone contracts of operators who dare to advertise on GB News.

“I mean have they ever tried to cancel a mobile contract?!

“But GB News will be ready to help.

“We will campaign for easier cancellation.”

His message was met with praise – as well as another wave of criticism.

One person tweeted: “The truth about #GBNews is that after forty years of failed deregulated free-market capitalism, leading to a broken and divided society, the stranglehold on UK politics and society by a handful of sociopathic Libertarian billionaires tightens.”

Someone else replied: “People have good reason to fear GB News might be biased when it’s figurehead starts a tweet ‘the woke warriors’.

“This tweet is nothing more than an advert to a specific type of person.

“Someone who is against a fair and just society and wants to be spoon-fed right-wing propaganda.”

Another person said Mr Neil sounds “rattled” and claimed people have the right to spend their money and time as they please.

“Look what happened to Fox News.

“If it wasn’t for unfair funding from the cable networks they would no longer exist.

“While you might appeal to a small section of society most people prefer the news to be reported truthfully.”

Benjamin Cohen, CEO of Pink News, tweeted: “Isn’t it also their free speech to campaign against you if they want to and a free market for them to decide which mobile network to use?

“Surely that’s exactly what you would believe in?

“I personally welcome more news, like your channel, but what is wrong with being woke?”

In September, the long-running BBC presenter landed a new gig as the flagship presenter and the chairman for the brand new TV network.

The new channel – whose main investor is Discovery Inc – will rival the likes of BBC and Sky.

Mr Neil will be one of a hundred journalists joining the new channel.

It is believed he will be hosting four one-hour shows a week in prime-time and will also chair the GB News editorial board.

GB News will be an advertiser-financed channel and available as a Sky channel, on Freeview, Virgin and all digital platforms.

Following being axed from the BBC last year, Mr Neil tweeted: “As for the future, I’m delighted to announce I have accepted the post of Chairman of GB News, a new news channel to be launched early in the New Year bringing new perspectives to the news.

“I will also be presenting a new nightly prime-time show on GB News. Watch this space.”