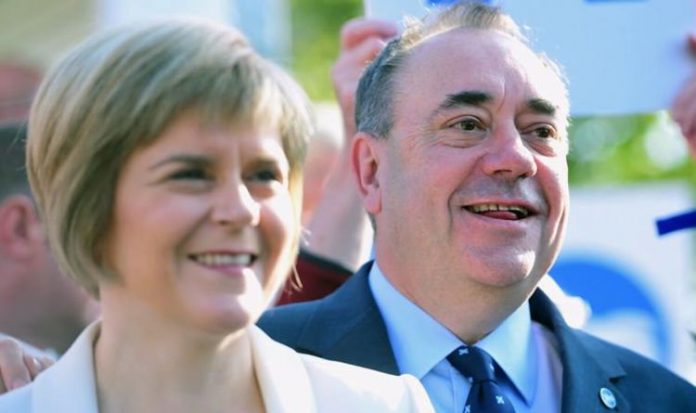 Written evidence by Ms Sturgeon has been published by the Holyrood committee investigating how the Scottish Government dealt with sexual harassment allegations against Mr Salmond. In March, Mr Salmond was acquitted of all charges including those made against him of sexual assault, attempted rape and indecent assault at the High Court in Edinburgh.

The court case followed a legal battle which saw him awarded more than £500,000 when the Court of Session in Edinburgh ruled a Scottish Government investigation into his conduct was “unlawful”.

On Wednesday, written evidence by Ms Sturgeon dated August 4, was given to a Committee of MSPs investigating the Scottish Government’s handling of harassment complaints.

The SNP leader told the inquiry she had “forgotten” about a meeting with Mr Salmond’s former chief of staff Geoff Aberdein on March 29, 2018, where he mentioned the former first minister wanted to meet to discuss “allegations of a sexual nature”.

Ms Sturgeon had previously told MSPs she first learned of the complaints against Mr Salmond during a meeting at her home on April 2, 2018.

Nicola Sturgeon and Alex Salmond on the campaign trail in 2014 (Image: GETTY)

In her evidence, Ms Sturgeon also said she spoke to Mr Salmond in November 2017 about allegations of sexual misconduct after receiving an inquiry from Sky News.

It also emerged in June 2018, Ms Sturgeon took three days to inform the Scottish Government’s most senior official there was a “serious prospect” of Mr Salmond taking legal action over the way sexual harassment allegations against him had been handled.

Responding to the inquiry, veteran broadcaster, Andrew Neil wrote on Twitter: “These revelations, if they were about a prime minister, would be potentially career destroying.

“London media would make it so. So the spotlight now falls on Scotland’s media: are they fans with laptops or a proper independent media prepared to hold Ms Sturgeon et al to account.”

Nicola Sturgeon was informed on complaints against Mr Salmond in April 2018 (Image: GETTY)

Explaining details of her encounters with Mr Salmond and Mr Aberdein, Ms Sturgeon wrote: “Alex Salmond told me on April 2, 2018 at a meeting at my home that complaints against him were being investigated under procedure.

“At that meeting, he showed me a copy of the letter he had received outlining the detail of the complaints.

“As has been reported already, four days earlier – March 29, 2018 – I had spoken with Geoff Aberdein in my office at the Scottish Parliament.

“Mr Aberdein was in parliament to see a former colleague and while there came to see me. I had forgotten that this encounter had taken place until I was reminded of it in, I think, late January/early February 2019.”

She added: “For context, I think the meeting took place not long after the weekly session of FMQs and in the midst of a busy day in which I would have been dealing with a multitude of other matters.

“However, from what I recall, the discussion covered the fact that Alex Salmond wanted to see me urgently about a serious matter, and I think it did cover the suggestion that the matter might relate to allegations of a sexual nature.”

In her submission, Ms Sturgeon added she agreed to meet with the former SNP leader as she believed he might be about to quit the party.

The inquiry was also told of messages between the pair two months later in June.

The First Minister said both the “tone and content” of a message she received from her predecessor on June 3, 2018 led her “to conclude that legal action by Mr Salmond against the Scottish Government was a serious prospect”.

Ms Sturgeon added she made Permanent Secretary Leslie Evans aware of the situation three days later and wrote to her on June 6.

In her full written submission, Ms Sturgeon said: “In my view, when these complaints were raised, the Scottish Government had a duty to investigate them and the fact that a mistake was made in the conduct of the investigation does not change that fact.

“To have swept them under the carpet because of who they related to would have been wrong.

“As far as my personal involvement is concerned, over the last couple of years, I have faced accusations of ‘conspiring’ against Alex Salmond and also of ‘colluding’ with him.

“I reject in the strongest possible terms both of these suggestions.

Nicola Sturgeon has been First Minister since 2014 (Image: GETTY)

“Indeed it seems to me that what some want to present as ‘conspiracy’ is in actual fact my refusal to ‘collude’ or ‘cover up’.

“In what was a very difficult situation – personally, politically and professionally – I tried to do the right thing.

“Whether I always got it absolutely right is something I still reflect on, and the committee will consider, but I sought all along to act in good faith and to strike the right balance of judgment given the difficult issues I was confronted with.

“In the light of the #MeToo movement, I sought to ensure that the Scottish Government developed a process that allowed allegations of sexual harassment – including allegations of a historic nature – to be fully and fairly considered.”