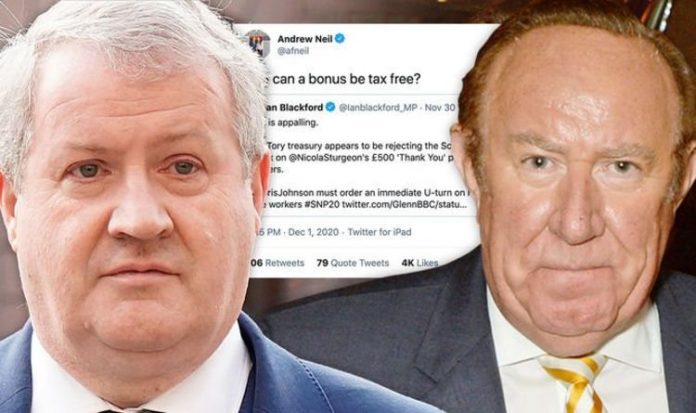 Nicola Sturgeon announced proposals to give NHS staff and social care workers a one-off tax-free bonus of £500 as a “Thank You” payment for their hard work during the coronavirus pandemic. The First Minister confirmed the plans at an SNP virtual conference as part of a £180million package that would benefit over 300,000 staff, including nurses, porters and residential care workers.

However, the devolved Scottish Government does not have the power to enforce the bonus without the approval of Prime Minister Boris Johnson.

The Treasury has since knocked-back the idea and directed the SNP to the £8.2billion of extra funding provided to the Scottish Government to help support people, business and public services.

The Department added taxes from these payments already go to Scotland and the SNP had the power to “gross up the payment if it wishes”.

On Twitter, Mr Blackford branded the response by the Treasury “appalling” and demanded an immediate U-turn.

Responding to the SNP Westminster leader on the media platform, Mr Neil questioned how a bonus payment could be exempt from taxes and called on Mr Blackford to provide some examples.

Reacting to a statement by the Treasury, Mr Blackford wrote: “This is appalling. The Tory treasury appears to be rejecting the Scottish Government’s plea to lift its tax on Nicola Sturgeon’s £500 ‘Thank You’ payment to NHS & social care workers.

“Boris Johnson must order an immediate U-turn on his bid to punish NHS and care workers.”

Mr Neil, then said: “How can a bonus be tax-free?”

Mr Blackford replied: “It is in the gift of the UK Government to make it so as happens with certain payment.”

The veteran political commentator then fired back and called for further evidence, he said: “Give me some examples.”

The tense exchange attracted a huge debate on Twitter and Mr Neil was then directed to a list of approved tax-free payments, such as travel expenses, meal subsidies and training costs by a user on the platform.

The political broadcaster was unwavering and insisted they did not cover the tax-free bonus proposed to healthcare workers.

Mr Neil said: “I know this list. Largely non-taxable benefits in kind. All very small. Not one ‘exemption’ could be classified as income, like a bonus. Keep looking.”

Upon announcing the plans over the weekend, Ms Sturgeon explained there would be “no strings attached” to the payment and insisted applause for carers was “never enough”.

The Fraser of Allander Institute (FAI) at the University of Strathclyde – a leading Scottish policy think-tank – has also criticised the tax-free bonus plan.

The Institute said the Scottish Government should instead looking towards paying NHS staff a higher gross bonus and highlighted if no bonus payments were taxed then everyone would take advantage of the loophole and receive their income through this method.

The FAI stated there was also a “healthy dose of politics” in the idea from the SNP.

It added: “Exempting any bonuses from tax is not widely regarded as a good use of tax policy.

“There’s a reason bonuses are taxed; if they weren’t, everyone would want paid in bonuses rather than regular pay.

“Making an exception to the rule once opens the possibility of endless future lobbying for tax-exempt bonuses – which is not something any Government should be keen to encourage.”