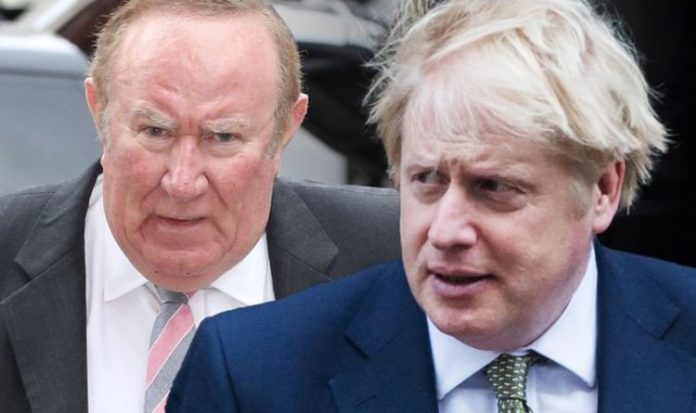 Andrew Neil is preparing for a new challenge in the media world as he announces the birth of GB News – a 24-hour rolling channel looking to rival established broadcasters such as the BBC. The launch has already been the subject of debate as social media campaign group Stop Funding Hate calls for an advertising boycott of the channel. GB News hit back at this in a letter, saying: “GB News will be staunchly independent…We are absolutely committed to our mission to report news in the most accurate and balanced way we can.” This came after Mr Neil outlined why he joined GB News, saying: “I believe the direction of news debate in Britain is increasingly woke and out of touch with the majority of its people.”

Mr Neil’s media career has seen him work for the Sunday Times, the Daily Mail and the BBC among others.

But it was at The Spectator – a political magazine of which he is currently the Chairman – where the journalist famously worked with now Prime Minister Boris Johnson.

In fact, when Mr Neil was appointed chief executive of the magazine in 2004, Mr Johnson was dealt an ultimatum by his new boss.

The politician was MP for Henley in Oxfordshire, and had just been sacked from a front-bench role in November 2004 for misleading Conservative Party leader Michael Howard when he denied having an extra-marital affair.

As Mr Neil arrived at The Spectator, he said that Mr Johnson’s front-bench role as arts spokesman would have been “incompatible” with editing an “independent-minded magazine”.

He added: “We are now looking forward to a period of quiet.

He also praised Mr Johnson, branding him a “great asset” to The Spectator who had become a “popular national figure” through his television appearances, but added recent events had “not done the magazine any great favours”.

Mr Neil then began referencing Mr Johnson’s policies, questioning whether they could be delivered.

He went on: “He vows that the NHS will not be on the table in any trade talks with America. But he vowed to the DUP, his unionist allies in Northern Ireland, that there would never be a border down the Irish Sea.

“That is as important to the DUP as the NHS is to the rest of us. It is a vow his Brexit deal would seem to break.

“The Prime Minister of our nation will, at times, have to stand up to President Trump, President Putin, President Xi of China.

“It was surely not expecting too much that he spend half an hour standing up to me.”