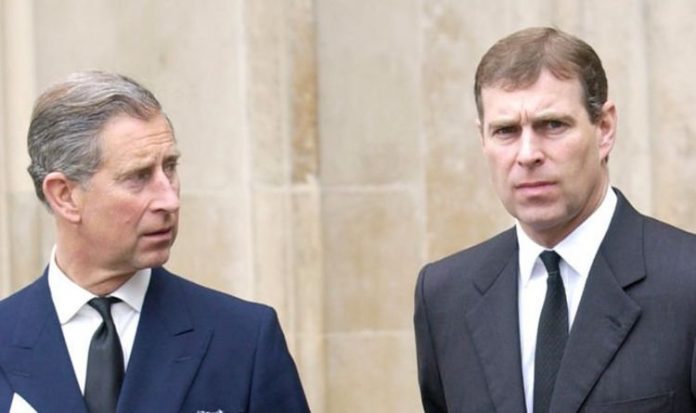 The Duke of York has been in hot water ever since his late friend Jeffrey Epstein was arrested on charges relating to sex trafficking last year. Epstein, already a convicted sex offender, killed himself before his trial — but US authorities continue to investigate a possible international sex trafficking ring run by the disgraced financier. Andrew then addressed his relationship with Epstein in an explosive BBC Newsnight interview last year.

The consequential outrage saw him to step down from his position as a senior, working royal and release a statement.

The Duke of York said he acknowledged his “former association with Jeffrey Epstein has become a major disruption to my family’s work” and that he continued to “unequivocally regret my ill-judged association” with him.

Claims from last year’s interview are still being dissected and the ongoing FBI investigation means the issue is never far from the public conscience.

Andrew has denied any knowledge of Epstein’s crimes and has been supported by Buckingham Palace. There is no indication that he is guilty of any wrongdoing. He vehemently denies any wrongdoing.

Royal biographer, Nigel Cawthorne, looked back at the Duke of York’s decision to step down from the public eye last year, while Andrew’s mother the Queen cut off his £249,000 annual allowance.

Charles allegedly thought Andrew had a plot to oust him as the heir to the throne (Image: Getty)

Writing in his book, ‘Prince Andrew: Epstein and the Palace’, he claimed: “It was thought that Prince Charles supported Andrew’s sacking from royal duties after his paranoia about the Duke’s attempted palace coup in the Nineties.”

Charles thought there was a plot to replace him as an heir by announcing on the Queen’s death — or abdication — that Andrew would be regent until Prince William turned 18.

At the time, Charles supposedly thought this was an idea conjured up by the Duke and Duchess of York and his estranged wife, Princess Diana, Mr Cawthorne claims.

He had also started to fall in the opinion polls because of his association with his mistress, Camilla Parker Bowles, and Diana’s candid interviews about their failing marriage and his infidelity only accelerated his fall.

This supposed plot was then allegedly cemented in Charles’ mind by Diana’s 1995 BBC Panorama interview.

In the bombshell programme, Diana suggested she did not think her husband would be king, and noted: “Who knows, who knows what fate will produce, who knows what circumstances will provoke?”

She also noted that the job as the monarch “would bring enormous limitations to [Charles] and I don’t know whether he could adapt to that”, while espousing the view that William could potentially inherit the throne ahead of his father.

As Charles’ younger brother, Andrew was the second-in-line to the throne at birth but was gradually pushed down as the Prince of Wales had children.

While it remains unlikely any such coup was ever planned, it’s no secret that the two royal brothers have never been close and Charles believed Andrew wanted the top job.

Charles allegedly told his private secretary Mark Bolland: “Andrew wanted to be me.

“I should have let him work with me.”

Charles and Andrew seemed to be in competition with one another from a young age (Image: Getty)

Worries about inheriting the throne added to his supposed suspicion of Andrew, Mr Cawthorne suggested.

As royal biographer Tom Bower said: “The one thing Charles is determined to do is inherit the crown and he won’t let anyone get in the world.”

While nothing seemed to come of this alleged coup, the royals’ feud deepened when Charles reportedly decided to remove him, Princess Beatrice and Eugenie from the Buckingham Palace balcony for the Queen’s Diamond Jubilee back in 2012.

This was part of Charles’ attempts to slim down the monarchy during a period of austerity.

However this happened only a year after the York daughters had been stripped of their royal security and it seemed like a huge blow to Andrew.

He then failed to attend Charles’ 50th celebration of his investiture as the Prince of Wales, without a formal excuse, seemingly cementing reports of a rivalry.

Many have since suggested that Charles’ role in Andrew’s demotion was a result of these underlying tensions.

Andrew has been in hot water over his association with Jeffrey Epstein for the last year (Image: Getty)

As a former courtier told Mr Cawthorne: “If so, it’s a fitting revenge.”

The Prince of Wales has clearly disapproved of his brother’s lifestyle in the past.

He once described Andrew as “a fizzy drink that has been shaken up and the top taken off”.

Another royal source told Mr Cawthorne: “Charles has disapproved quite a lot of Andrew’s friends and acquaintances over the years, and Epstein is no exception.”

Yet, Mr Cawthrone also claimed: “Charles refused to answer questions about his role in Andrew’s downfall.”

‘Prince Andrew: Epstein and the Palace’ by Nigel Cawthorne was published by Gibson Square in 2020 and is available here.