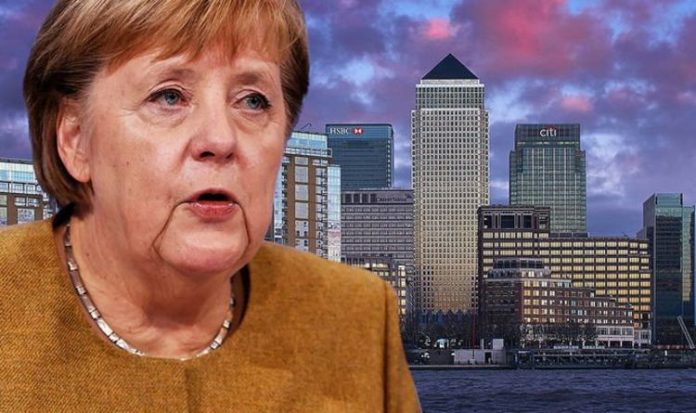 Brexit negotiations with the EU started up again last week, with talks on financial services. After months of wrangling, new rules for trade were finally agreed on Christmas Eve, just days before the year-end deadline. But in a document spanning over 1,200 pages, there was very little mention of financial services: a sector which accounts for seven percent of the UK’s economy and 10 percent of its tax receipts.

The two sides hope there will be a “memorandum of understanding” in place by the end of March.

The agreement will seek to ensure the two sides continue to have similar regulations going forward that mean similar standards are upheld both in Britain and on the continent.

According to Lee Rotherham, the former director of Special Projects at Vote Leave, there is a simple explanation why the deal did not include an arrangement for financial services.

He wrote in a report seen exclusively by Express.co.uk: “Overall, the Services section seems like an average free trade agreement (FTA), enabling activity up to a point.

“It is worth remembering that of the so-called ‘Four Freedoms’, [Services] is the area that was least pursued by the EU.”

It is no secret that the bloc’s main hubs, such as Frankfurt and Paris, have been trying to use Brexit to spell the end of London’s status as one of the world’s leading financial hubs.

Canary Wharf is seen by many as the epicentre of the financial sector in London.

During his premiership, though, Mr Johnson has always dismissed the warnings European financial hubs could steal away the City of London’s supremacy.

In 2018, Mr Johnson was hailing London’s financial sector during a speech at the UK-Africa Investment Summit when he took the swipe at Mrs Merkel.

The Prime Minister said: “One tube stop away and you’ll be in Canary Wharf where, along with its older siblings in the City, trillions of pounds in capital are being raised for every venture you can think of, from French construction to African telecoms to American cancer-curing drugs.

JUST IN: Gordon Brown’s warning to Sturgeon: ‘Rest of UK will get pensions’

Referring to Brexit enthusiasts who claim that the City can now enjoy another Nineties’ style leap forward, Mr Sunak said they “make a really, really good point”, adding that people were free to “call it Big Bang 2.0 or whatever”.

He added: “If you look at the history of the City stretching even further back than that, it has always constantly innovated, adapted and evolved to changing circumstances and thrived and prospered as a result. And I think it will continue to do that.”

Mr Sunak said the Treasury would “play a role in that, and all the businesses and the people involved will help us do that”.

However, the Chancellor also played down the need for fundamental change in the City, pointing to its natural advantages and the “culture and creativity of our people”.

He noted: “Regulation is important, of course, as is timezone, as is language. All of those things are important.”